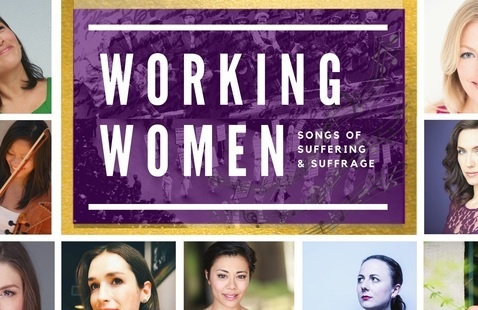 The American Opera Project announces Working Women: Songs of Suffering and Suffrage, a program combining a trio of "Songs of Suffrage" presented alongside excerpts from the chamber opera Letters That You Will Not Get: Women's Voices from the Great War as an online tour ending on November 11, 2020, Veterans Day, formerly Armistice Day. Working Women connects the women of World War I, the women who fought for suffrage, and the women of today through the power of song, using archival footage alongside documentary-style music videos by filmmaker Lesley Steele. For more information about this virtual event, please click here.

Reed's own Assistant Visiting Professor of Music Kirsten Volness will debut her chamber opera Letters That You Will Not Get, a production that gives voice to the women of WWI. Letters That You Will Not Get: Women's Voices from the Great War (composer Kirsten Volness, librettists Kate Holland, Susan Werbe) gives voice to American, British, European, Asian, African and Caribbean women affected by World War I through a series of vignettes that share their responses to the war. Using women’s writings on all sides of the conflict, Letters tells the story of the Great War as experienced by the women who lived through it. It is scored for an all-women ensemble of six singers (Angel Desai, Briana Hunter, Maria Lindsey, Caitlin McKechney, Jessica Sandidge, Sarah Beckham-Turner) and string quintet (Meaghan Burke, Mimi Jones, Elena Moon Park, Andie Tanning, Melissa Tong). Excerpts were recorded at the artists’ homes in July 2020 and the opera is scheduled to premiere in the 2021-22 season in a fully-staged production by AOP.

The American Opera Project's Artistic Director, Mila Henry says this about the project:

“At a time of great unrest and revolution– when those taken for granted are now in the fore, when lives have been lost to disease and discrimination, when voices need to be amplified and communities reminded to vote– I find the themes of Working Women: Songs of Suffering and Suffrage ever relevant, showing us that despite massive strides forward, we are still several steps back. Letters That You Will Not Get demonstrates how the Great War provided an opportunity for women to break out of their assumed roles and show the world that their actions and opinions mattered, bursting the door to women's suffrage open; but our 'Songs of Suffrage' reminds us that while some battles were won, some took years to achieve... and others continue to be fought today.”

Working Women: Songs of Suffering and Suffrage is supported by an Art Works award from the National Endowment for the Arts, making it one of 1015 grants nationwide that the agency has approved in this category. Mary Anne Carter, chairperson of the National Endowment for the Arts, said “We celebrate organizations like The American Opera Project for providing opportunities for learning and engagement through the arts in these times.”