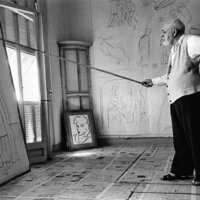 What's with the Bamboo Stick? Matisse's Drawing Practice and his Stations of the Cross at Vence

Yve-Alain Bois, professor of art history in the School of Historical Studies at the Institute for Advanced Study, presents a lecture for the Stephen E. Ostrow Distinguished Visitors in the Visual Arts Series.

In a photograph dating from 1931, Matisse is shown sketching The Dance—a gigantic mural commissioned by Albert Barnes—with his charcoal at the end of a six-foot bamboo stick. This unusual practice stems from the artist’s discovery, dating from the time he was working on his 1906 Bonheur de vivre, that squaring up a small sketch, as has been the standard procedure for large paintings and murals since at least the Renaissance, was incompatible with his aesthetic. The bamboo stick resurfaces in Matisse’s studio at the end of the 1940s when he is working on his Vence Chapel, his old age further emphasizing the acrobatic nature of the feat and the amazing control the artist had of his drawing tool. But while Matisse’s use of the cane is consistent with the artist’s creed with regard to two of the chapel’s murals, it seems absurd when he dealt with the third mural, the Stations of the Cross, for which each of the fourteen stations was first sketched on an individual piece of paper at  final scale. For Matisse, a picture plane must always be conceived and perceived whole; the piecemeal approach was anathema to him—so that the narrative structure of the Stations of the Cross was entirely contradictory to his aesthetic. Yet the choice of this topic for the Vence Chapel was fully his. What is one to make of such a contradiction? And was Matisse attempting to mask it, or on the contrary to reveal it, by the extraordinarily rough manner in which he painted his Stations, a deliberate “primitivism” that has so far prevented Matisse scholars from giving a close look at this work.

Yve-Alain Bois is professor of art history in the School of Historical Studies at the Institute for Advanced Study. A specialist in twentieth-century European and American art, Bois is recognized as an expert on a wide range of artists, from Henri Matisse and Pablo Picasso to Piet Mondrian, Barnett Newman, and Ellsworth Kelly. He has curated and co-curated a number of influential exhibitions, including Piet Mondrian, A Retrospective (1994); L’informe, mode d’emploi (1996); Matisse and Picasso: A Gentle Rivalry (1999); and Picasso Harlequin 1917–1937 (2008). His books include Ellsworth Kelly: Catalogue Raisonné of Paintings, Reliefs, and Sculpture: Vol. 1, 1940–1953 (2015); Matisse in the Barnes Foundation (2015); Art Since 1900 (with Benjamin Buchloh, Hal Foster, and Rosalind Krauss, 2004); Matisse and Picasso (1998); Formless: A User’s Guide (with Rosalind Krauss, 1997); and Painting as Model (1990). Bois is currently working on several long-term projects, foremost among them the catalogue raisonné of Ellsworth Kelly’s paintings and sculptures.