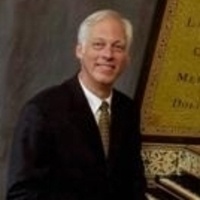 Get your tickets here.

Though we think of music mostly in the context of performance today, much of music making in the past happened in the most private spaces of the home, where composers could take refuge from the pressures of employment and commissions by letting their innermost thoughts take musical flight. J.S. Bach took to the clavichord at the end of the day to play spontaneous keyboard transcriptions of his works for unaccompanied strings. Girolamo Frescobaldi reinvented the rich world of the madrigal into a language for the fingers. William Byrd spun brilliant essays in musical imagination over simple harmonic patterns. Each of these composers left a legacy of music that invites us along on their flights of fancy.

Gregory Crowell has appeared internationally as organist, harpsichordist, clavichordist, lecturer, and conductor, performing in many festivals and conventions, including the American Guild of Organists and Organ Historical Society conventions, the Boston Early Music Festival, the Saugatuck Chamber Music Festival, the Fontana Chamber Music Festival, the Boston Clavichord Society, the International Clavichord Symposium , and meetings of the Southeastern and Midwestern Historical Keyboard Societies. Particularly noted for his performances of the keyboard works of Johann Sebastian Bach, Crowell has been a featured performer at the Weener (Germany) International Bach Series, the Grand Rapids Bach Festival, the Old West Organ Society (Boston) Bach Marathon, and the Valparaiso Bach Institute.

Broadcasts of Gregory Crowell's performances have been heard on numerous radio programs, including NPM's Pipedreams, and his compact disc recordings include live organ performances on the OHS label. Crowell's solo performances have been described as "beautiful, flexible, expressive" (The Diapason), "full of panache and expression" (Ostfriesen Kurier), "reliable as a sunrise, steady as a rock, especially in the virtuoso finale" (The Grand Rapids Press), and "this listener cannot recall ever having heard better" (The Boston Herald).

Crowell has also published widely on subjects related to early keyboard instruments and their repertoire and is the current editor of Clavichord International. Dr. Crowell serves as University Organist and Affiliate Professor of Music General Education at Grand Valley State University, and Director of Music at St. Mark's Episcopal Church in Grand Rapids, Michigan.

Send your news items of interest to the early keyboard community – announcements of events,  reports of workshops and conferences, information about resources, etc. – to WEKA at news@wekaweb.org