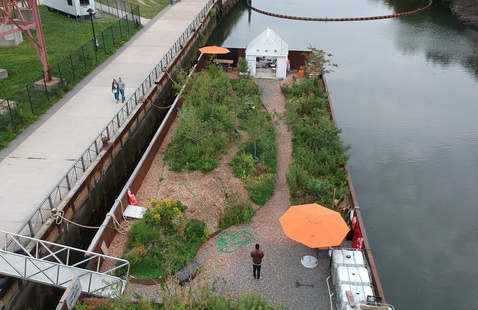 Mary Mattingly is a visual artist. She founded Swale, an edible landscape on a barge in New York City. Docked at public piers but following waterways common laws, Swale circumnavigates New York's public land laws, allowing anyone to pick free fresh food. Swale instigated and co-created the "foodway" in Concrete Plant Park, the Bronx in 2017. The "foodway" is the first time New York City Parks is allowing people to publicly forage in over 100 years. It's currently considered a pilot project.

Mattingly recently launched Public Water with More Art and completed a two-part sculpture “Pull” for the International Havana Biennial with the Museo Nacional de Bellas Artes de la Habana and the Bronx Museum of the Arts, two spherical ecosystems that were pulled across Habana to Parque Central and the museum. In 2018 she received a commission from BRIC Arts Media to build "What Happens After" which involved dismantling a military vehicle (LMTV) that had been to Afghanistan and deconstructing its mineral supply chain. A group of artists including performance artists, veterans, and public space activists re-envisioned the vehicle for BRIC. In 2016 Mattingly led a similar project at the Museum of Modern Art. In 2014, an artist residency on the water called WetLand launched in Philadelphia and traveled to the Parrish Museum. It was utilized by the University of Pennsylvania’s Environmental Humanities program until 2017.

Mary Mattingly’s work has also been exhibited at Storm King, the International Center of Photography, the Seoul Art Center, the Brooklyn Museum, the New York Public Library, deCordova Museum and Sculpture Park, and the Palais de Tokyo. With the U.S. Department of State and Bronx Museum of the Arts she participated in the smARTpower project, traveling to Manila. Mattingly has been awarded grants and fellowships from the James L. Knight Foundation, Eyebeam Center for Art and Technology, Yale University School of Art, the Harpo Foundation, NYFA, the Jerome Foundation, and the Art Matters Foundation. Her work has been featured in Aperture Magazine, Art in America, Artforum, Art News, Sculpture Magazine, The New York Times, New York Magazine, Financial Times, Le Monde Magazine, Metropolis Magazine, New Yorker, The Wall Street Journal, the Brooklyn Rail, and on BBC News, MSNBC, NPR, WNBC, and on Art21. Her work has been included in books such as the Whitechapel/MIT Press Documents of Contemporary Art series titled “Nature” and edited by Jeffrey Kastner, Triple Canopy’s Speculations, the Future Is... published by Artbook, and Henry Sayre’s A World of Art, 8th edition, published by Pearson Education Inc.

Art, Division of The Arts