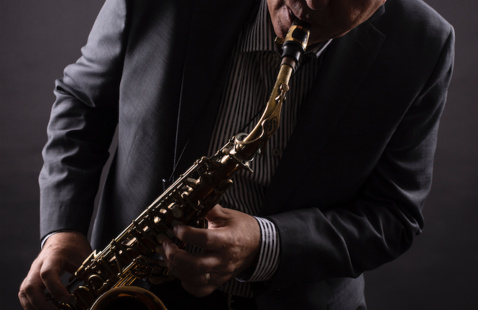 Tonight's program will include "Singing in the Dark" (2002) and "Road Maps"  (2008/2014) and will feature Marty Ehrlich on alto saxophone and Myra Melford on piano. Co-presented with 45th Parallel Universe.

Marty Ehrlich is celebrating 40 years in the nexus of creative music centered in New York City. He has made thirty recordings of his compositions for ensembles ranging in size from duo to jazz orchestra. These groups include his Dark Woods Ensemble, Traveler’s Tales Quartet, Rites Quartet, Trio Exaltation, as well as numerous collaborative groups. As a multi-instrumentalist passionate about improvisation and interpretation, he has performed with a who’s who of contemporary composers and appears on more than 100 recordings. Ehrlich has performed with the Chicago Symphony, the BBC Symphony, the New York City Opera, Chamber Music Society of Lincoln Center, Chamber Music Northwest, and other classical ensembles. He has worked with the Jose Limón and Bill T. Jones dance companies. He continues his work presenting and preserving the music of Julius Hemphill, whose archive he is currently cataloging. His honors include a Guggenheim Fellowship in Composition, the Peter Ivers Visiting Artist Residency at Harvard University (with painter Oliver Jackson), composition grants from Chamber Music America, the NEA, and NYFA, “Clarinetist of the Year” from the Jazz Journalist Association, and a Distinguished Alumni award from NEC. He is currently Professor of Jazz and Contemporary Music at Hampshire College.

The pianist, composer, bandleader and educator Myra Melford has spent the last three decades making brilliant original music that is equally challenging and engaging, culling inspiration from a wide range of sources including Cecil Taylor, the blues and boogie-woogie of her native Chicago, the poetry of Rumi, the AACM, and yoga.. Melford’s most recent release, The Other Side of Air (Firehouse 12), by her quintet Snowy Egret, is an extraordinary document of her unique creative language—a seamless, shifting blend of composition and improvisation, and a probing of the space shared between dynamic small-group jazz and contemporary chamber music. Since debuting on record as a bandleader in 1990, she’s built a discography of more than 20 albums as a leader or co-leader. She is the recipient of numerous DownBeat poll placings, a 2000 Fulbright scholarship, a 2012 Alpert Award in the Arts for Music and, in 2013, a Guggenheim Fellowship, the Doris Duke Performing Artist Award, and the Doris Duke Residency to Build Demand for the Arts. After having been an influential presence in New York since the mid-’80s, Melford relocated to the Bay Area in 2004 to join the music department at the University of California, Berkeley, as a Professor of Composition and Improvisational Practices. She continues to bring cutting-edge jazz and new music to the campus community via her teaching and as a guest curator for the Cal Performances organization.

45th Parallel Universe is musician directed, curated, and managed. An experiment in musical socialism, they believe in great music, great friends, a passion for education, and a deep love for Portland. At a time when so much energy is being spent on fomenting divisions, music is their way of creating the type of world in which we want to live. 45th Parallel Universe’s six concert season features a tremendous range of musical styles, from baroque to modern, performed by a premier roster of virtuoso musicians who also regularly perform with the Oregon Symphony.