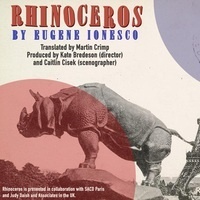 REGISTER to gain access to each act as they are released each Friday through November 20.  REGISTRATION WILL BE UNAVAILABLE SUNDAY AND MONDAY, NOVEMBER 8-9, BUT WILL REOPEN TUESDAY. Visit the Rhinoceros webpage by clicking here.

Synopsis: Bérenger finds himself increasingly alone as his friends, work colleagues, and neighbors one by one turn into rhinoceroses. Set in a small French town, Eugène Ionesco’s play takes a classic form to tell his jarring story of accumulation. Through the lens of the pandemic, wildfires, and Revolution of 2020, immigrant Ionesco’s tale speaks to a variety of spreads, including fascism, white supremacy, and viral contagion. Reed Theatre shares this story with you as a serial that will unfold over three weeks, itself mirroring the accumulation narrative of the play. In the moment of its first production, 1960, Rhinoceros was a dazzling display of what Martin Esslin called the Theatre of the Absurd—seventy years later, and through Martin Crimp’s fresh translation, Ionesco’s warning speaks louder than ever.

Each Friday, a new act will be released based on the schedule below. You can watch any of the acts as they are released at any time with the login and password you will receive when registered. All acts will be released by 11/20 if you wish to wait until then to experience the entire play at one time.

Register
This event content is powered by the Localist Community Event Platform.