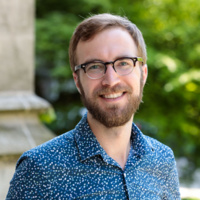 In the Antebellum US, both liberal and republican political philosophies apotheosized a racialized freedom concept as the highest civic value. This lecture explores how contemporary black writers critiqued and refused the anti-black regime of liberal citizenship by mobilizing an unsettling figure, one debased from the discourse of Atlantic modernity: the voluntary slave.

Chris Taylor is an assistant professor of English at the University of Chicago, where Caribbean and African-American literatures from the 18th and 19th centuries are taught. Their research interests include black political thought, the cultures of slavery and antislavery, and the history of freedom. Their first book, Empire of Neglect: The West Indies in the Wake of British Liberalism, was published in 2018 (Duke University Press). Currently, they are working on a new book project entitled, The Voluntary Slave: Atlantic Modernity’s Impossible Subject.

Sponsored by the English department. Free and open to the public.