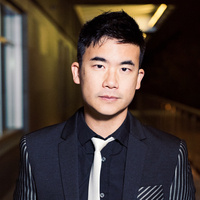 Simon Tam - Slanted: How an Asian American Troublemaker Took on the Supreme Court

When Simon Tam started an Asian American dance rock band called The Slants, he didn't realize that he was starting an entire movement around freedom of expression and discussions on identity. The band flipped stereotypes with their bombastic live shows, community activism, and anti-racist workshops. But when Simon applied to register a trademark on the band's name, the government dragged him all the way to the Supreme Court of the United States. In 2017, the band won a unanimous victory for their landmark case, Matal v. Tam.  Join us for a live acoustic performance and Simon's story about what happens when art, activism, and intellectual property law collide.

Simon Tam is an author, musician, activist, and troublemaker. In addition to being the founder and bassist of The Slants, he has been a keynote speaker, performer, and presenter at TEDx, SXSW, Comic-Con, The Department of Defense, and over 1200 events across four continents. He was named a champion of diverse issues by the White House and worked with President Barack Obama’s campaign to fight bullying. In 2018, he founded The Slants Foundation, an organization dedicated to providing scholarships and mentorship to artists combining activism and community engagement into their work.

Copies of Tam's book, Slanted, will be available for purchase.

Sponsored by the political science department and the Office for Institutional Diversity. Free and open to the public.

Vollum is situated on the north end of Eliot Circle.