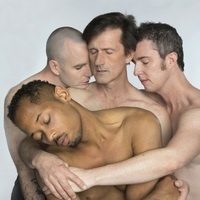 Hailed as the nation’s first acclaimed transgender contemporary dance choreographer, Sean Dorsey’s works have been praised as “exquisite…poignant and important” (BalletTanz), “trailblazing” (San Francisco Chronicle) and “evocative, compelling, elegant” (LA Weekly). Based on oral history interviews that Sean recorded with survivors of the early AIDS epidemic The Missing Generation is a love letter to a forgotten generation of survivors, written in full-throttle dance, luscious partnering, intimate storytelling and theater.

About Sean Dorsey: Sean Dorsey is an award-winning transgender and queer choreographer who has toured his work to 25 cities across the US. Sean also created THE SECRET HISTORY OF LOVE, which was recently awarded a Special Achievement Award at the 2014 Isadora Duncan Dance Awards and was presented by The Theater Offensive in May 2012. He is the Artistic Director, as well as a dancer in, THE MISSING GENERATION.