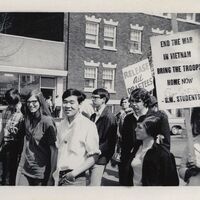 Screening of The Draft and The Vietnam Generation by Beth Sanders

You are cordially invited to a screening of The Draft and The Vietnam Generation by Beth Sanders '78 on Sunday, January 26 at 1 p.m. at the Northwest Film Forum (1515 12th Ave, Seattle, WA). We will have Q&A and some refreshments afterwards. Please RSVP via email to reserve a seat, as space is limited.

Beth Sanders’ past works include Fear and Favor in the Newsroom, a documentary on self-censorship within the American press narrated by Studs Terkel, and Making the News Fit, which examined American press coverage of the civil war in El Salvador, and was awarded an Emmy from the Midwest chapter of NATAS. Beth is a graduate of Reed College in American Studies and currently lives in Seattle.

“The revolt against the Vietnam-era draft was an outstanding episode in the moral history of the United States. Beth Sanders’ documentary shows how the draft clouded the life of the country and accurately conveys a sense of how so many struggled to get out from under that cloud.”

—Todd Gitlin, professor of journalism and sociology, Columbia University, past president, Students for a Democratic Society.