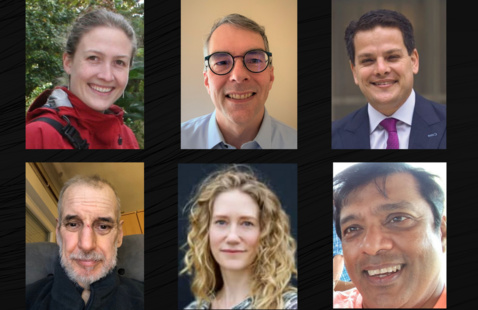 Register here for the event!

The Reedies Wrestling with Wicked World Woes panel is the eighth installment of the ongoing Career Pathways panel series hosted by the Reed Career Alliance committee of the Alumni Board that explores different career pathways taken by Reedies in a similar field of work. Past panels are available to watch at any time on alumni.reed.edu.

James was a Trial Attorney at Federal Defenders of San Diego, Inc. (FDSDI) from 2007 to 2020. FDSDI is one of the most respected public defender offices in the nation, recruiting new lawyers from the best law schools from coast to coast. James trained and mentored these attorneys for more than a decade. In 2019, Harvard Law School choose James as a Wasserstein Public Interest Fellow for being an exemplary public interest lawyer and mentor.

James majored in economics at Reed and put this degree to use for a couple of years at the Federal Reserve Board, delivering his economic analysis to the office of Chairperson Alan Greenspan. But he wanted a career of service where the benefits of this work were more tangible. so he enrolled and earned his Juris Doctorate at UC Berkeley School of Law. He was the president of his graduating law school class, which earned him the opportunity to speak during the graduation ceremony along with his personal hero and legal luminary Bryan Stevenson of the Equal Justice Initiative.

James finds great joy in the courtroom challenging opposing counsel and judges, defending his clients, and trying cases. He has handled thousands of felony and misdemeanor cases over the course of his career, from simple misdemeanors to felonies punishable by death. He has tried over twenty jury trials in criminal cases, avoiding conviction in a third of them.

Additionally, James has had remarkable success in his appellate practice, including arguing seven times total before the Ninth Circuit Court of Appeals and California Courts of Appeal.

Angelina has more than 10 years of experience helping startups, corporations and
governments determine the right strategy and relentlessly pursue it. After receiving a 2004 International and Comparative Policy Studies B.A. (political science + economics) from Reed College, she began her career at Harvard University, helping to articulate strategic options for the United States on key foreign policy issues. She then pursued an MBA at MIT, focusing on business models for emerging markets while completing project work on five continents. Captivated by the economic opportunities in Brazil, she then joined the São Paulo office of McKinsey & Company, a management consulting firm. In the ensuing 10 years in Brazil, she has co-founded a startup to help low-income Latin Americans find work, run strategy for a growth-stage venture-backed education company, and advised entrepreneurs on surviving—and thriving—in the Wild, Wild South.

Craig is an Economic and Health Policy Analyst with the Oregon Health Authority, the state health agency. His career has focused on using research and data to inform policy development and evaluation. Near the beginning of the COVID-19 pandemic, he led the effort to forecast COVID-19 hospitalizations. His current focus is the transformation of the behavioral health (mental health/substance use disorder) system in Oregon. At Reed, Craig was a physics major, and he earned a Master of Public Health from Oregon Health & Science University. Earlier in his career, he worked in the criminal justice field, developing sentencing policies. Craig was the founding president of the Portland Farmers Market, and he was on the founding board of Upstream Public Health.

Govind took an early retirement from the World Bank where he left in 2010 as Lead Economist after a 25-year career in international economic development. His non-proverbial journey to Timbuktu typifies a lot of his work on all continents: working with a wide range of country stakeholders (e.g., Touareg nomads in Mali) to get results (e.g. enabling mobile communications to compete with incumbent landline phone monopolies). He established a private international consultancy and training practice from 2010 to 2017 and has also taught in universities in Australia, Malaysia, and the United States. He has made presentations and participated as keynote or panelist in many conferences and workshops worldwide on issues of globalization, innovation policy, and ethical humanism. After journeying to about 100 countries, he has moderated his travel in the age of the pandemic, now mostly dividing his time each year between the United States and the United Kingdom. He suspects a Renn Fayre 1982 concussion may explain why he continues to wrestle with wicked world woes.

Rachael is the Chief Sustainability Officer at My Green Lab, a non-profit organization dedicated to building a culture of sustainability in science. Rachael partners with organizations around the world to build tools and resources that support laboratory sustainability and help accelerate the adoption of best practices.  Through education, engagement programs, and certifications, Rachael and My Green Lab are inspiring and supporting scientists as they advance sustainability at the bench. Rachael has a BA from Reed and a PhD in chemistry from Yale University and led Design for Environment and Sustainability initiatives for Life Technologies and Thermo Fisher Scientific.  On weekends and holidays Rachael enjoys camping, biking or hiking with her family and friends.  One day she hopes to hike the entire Pacific Crest Trail from Mexico to Canada.

Charles worked with the environmental and anti-war movements in New York in the 1960s. He was a physics major at Reed. At Reed, he took part in Ramsay Clark Day and other social actions. He worked actively with the first actions of Greenpeace. He moved from policy work to practice with people, and studied medicine, obtaining his qualification in Groningen, Netherlands. In Groningen, he worked as a student assistant in psychiatry. After graduating, he was a member of the Amnesty International-International Physicians for the Prevention of Nuclear War Medical Examination Group and other groups supporting asylum seekers and refugees. When the wars in Yugoslavia started in the 1990s, several members of these groups formed a working group which later became the Coalition for Work with Psychotrauma and Peace (CWWPP). Charles has been in Croatia, Serbia, and Bosnia since 1995. The CWWPP educates people without previous training to give psychological assistance to their peers, known as “barefoot therapy”/“peer support”. The training is given online and on-site without charge. Beneficiaries include migrants, refugees, war victims, and people who have been physically, psychologically, and sexually abused. The CWWPP is in the process of writing self-paced online courses.