Reedies in Government Panel hosted by the Reed Career Alliance 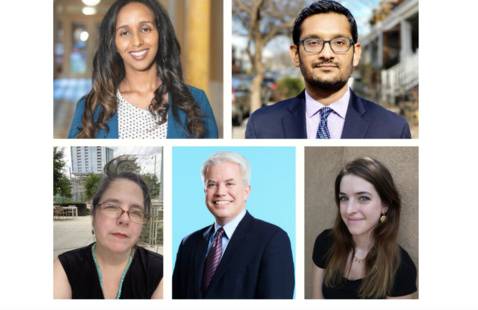 The Reed Career Alliance (RCA) invites you to a virtual event with alumni panelists to learn more about Reedies' experiences in a variety of government careers.

Government work is much more than holding public office—there is a wide range of opportunities for people in every area of expertise. Join moderator and panelist Dylan Rivera ’95 and panelists Stevie Greathouse ’94, Avy Mallik ’07,  Maia Scarpetta ’16, and Winta Yohannes ’16 as they talk about their journeys from Reed to exciting government careers. From urban planning to financial technology policy to public communications to COVID-19 epidemiology to BIPOC community development, these Reedies represent diverse fields and interests. Panelists will share anecdotes from their career paths including further education after Reed, key decisions that led them along the way, and how their work is helping to make the world a better place.

Register here for the event!

The Reedies in Government panel is the seventh installment of the ongoing Career Pathways panel series hosted by the Reed Career Alliance committee of the Alumni Board that explores different career pathways taken by Reedies in a similar field of work. Past panels are available to watch at any time on alumni.reed.edu.

Stevie is an urban planning professional with 25 years' experience managing land use and transportation planning projects and programs at the local and regional level. She currently serves as a division manager over long-range planning for the City of Austin Housing and Planning Department.

After receiving her BA in English Literature from Reed College, Stevie earned her Master's Degree in Urban and Regional Planning and worked as a long range planner for the City of Portland for almost a decade before returning home to Texas in 2003. In Austin, Stevie has held multiple planning positions in local and regional government, and is known as a collaborative, effective leader and project manager. In her spare time, Stevie serves on the board for a local non-profit focused on increasing access to public transit and enjoys spending quality time with her husband, dog, and 13-year old son.

Avy Mallik is Director of Fintech Policy at the Financial Services Committee of the U.S. House of Representatives, where he focuses on the intersection of finance and technology, and leads the Committee’s work on the Task Force of Financial Technology, Task Force on Artificial Intelligence, and the Digital Assets Working Group, which is tasked with policy issues related to cryptocurrency. Previously, Avy served as Senior Counsel in the Consumer Protection and Financial Institutions Subcommittee. Avy has also served as Assistant Attorney General at the Maryland Office of the Attorney General’s Consumer Protection Division, and as Director of the Foreclosure Prevention Program at Civil Justice. A graduate from Georgetown University Law Center and Reed College, Avy has extensive experience in consumer protection, government oversight & investigations, financial technology, and international human rights law. He lives in Washington, DC with his wife, 15 month old son Rai, and his many guitars, which he uses for his indie-folk project Near Northeast.

For 25 years, Dylan Rivera has worked at the intersection of the news media and government agencies. As a daily newspaper reporter, he chased tornados, floods and volcanic eruptions; interviewed mayors, governors and CEOs and once rode in a helicopter over downtown Portland to write a photo caption. As the Public Information Officer for the City of Portland Bureau of Transportation (PBOT) since 2013, he does on-camera TV interviews on a few minutes notice, calls press conferences during snowstorms on a few hours notice and has been known to grow the bureau’s Twitter audience by 30 percent in a weekend. He’s the public face of a 1,000-person organization that is at the leading edge of the movement to fight climate change by expanding access to bicycling and public transit, and fight systemic racism by making the built environment safer and more accessible, especially in communities that have been underserved by government agencies. As a Reed student, he served on three Quest Boards, was the first-ever chair of the Gray Fund Committee, and lived in the Spanish House for two years. As an active Reed alum, Rivera was on the Board of Trustees for five years, leading communications for the most recent presidential search, and currently serves as the Secretary of the Reed College Alumni Board. He hosts Reed students for job shadows and paid summer internships at PBOT, and two have landed jobs after their internships in recent years.

Maia is an infectious disease and social epidemiologist who began her career in public health while pursuing a Masters of Public Health at the University of New Mexico. She is currently a COVID-19 epidemiologist at the Alameda County Public Health Department and receives funding from the National Foundation for the Centers for Disease Control and Prevention, Inc. (CDC Foundation).

After graduating with a BA in Psychology from Reed College in 2016, Maia worked in neuroscience research. She transitioned towards public health in order to pursue her interest in how health outcomes and disease patterns are determined by sociodemographic factors, policy, and infrastructure, both current and historical. When she graduated with her MPH in May 2020, she immediately began work in COVID-19 prevention and control as a contact tracer with the New Mexico Department of Health, and as a case investigator in collaboration with the Indian Health Service (IHS), Partners in Health (PIH), and the Navajo Nation. Her recent work as an epidemiologist at the Alameda County Department of Public Health has helped translate county-wide data into policies and strategies that increase vaccine uptake among marginalized and underserved communities. She is also currently pursuing a PhD in Epidemiology and Translational Science at the University of California, San Francisco, where she continues to focus on the intersections of social determinants of health and infectious diseases.

Winta serves as the executive director of the Albina Vision Trust (AVT). AVT is stewarding the thoughtful reinvention and transformation of the lower Albina neighborhood in Portland from which thousands of primarily African Americans residents were forcibly displaced by urban renewal. Previously, Winta served as a senior policy advisor in Portland City Hall where she advised on issues of civil rights, public safety and civic engagement.

While at Reed, Winta co-founded the college's first social justice themed dorm, produced an international documentary about the refugee crisis through the Presidential Fellowship and wrote her thesis on the social science underlying plea bargaining decisions.