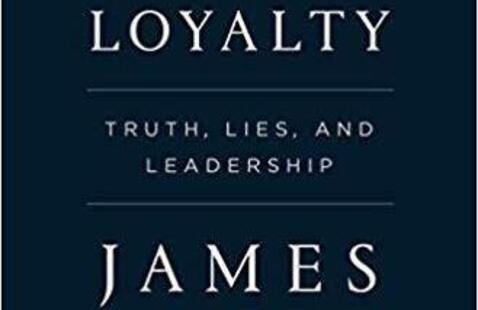 Location to be announced.

“[T]he newsiest elements [in 'A Higher Loyalty'] appear fairly deep in the book. First, there is plenty about Comey’s childhood, his early career as a prosecutor in New York, and his time in Washington as a top Justice Department official during the George W. Bush administration. This is a real memoir, with recollections and dilemmas building methodically, sometimes dramatically, toward his ethical leadership ideals. But even as chapters fly by without a mention of the current president, Trump hovers."  Carlos Lozada in The Washington Post.  Here is a link to the full review:

"The confrontations memorialized here, especially when Trump says he wants the FBI to drop its criminal investigation of the disgraced Mike Flynn and “lift the cloud” of the investigation of Russian meddling in the 2016 election—and then fires Comey [called 'the most politically influential FBI director since Hoover'] for refusing to put the fix in—are as gripping as any chapter of presidential history has ever been. It’s better than Watergate’s smoking gun tape: the president of the United States was trying to suborn the FBI director in an obstruction of justice. Comey testified about much of this last year, but the added atmospherics in the book are powerful. The image of the president as mob boss is indelible. The stench of criminality hangs in the air of the West Wing like cordite."   Tim Weiner in the New York Review of Books.  Here is a link to the article in which it appears:

The Deep State, to Trump, is a secret brotherhood of military and intelligence officers secretly manipulating the body politic, and is still run by the leaders of the American intelligence organizations under President Obama, along with unnamed sinister forces still resilient within the Justice Department. These are the same people who revealed a brazen covert operation by Vladimir Putin and ...

If you can't open it and want to read it, please let me know.