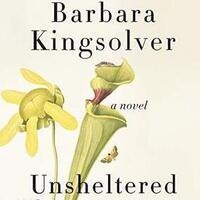 Barbara Kingsolver's eighth novel, which has been the subject of both critical praise and scorn, tells two stories centered in the same New Jersey house: one is set in the second half of the19th century, when the culture was divided by such things as the ideas of Darwin and an embrace of empiricism, on one side, and a nostalgia for a pre-modern world and an embrace of fundamentalism, on the other; the second is set in a 21st century moment, fresh in readers' minds.

"A dual narrative needs to be not only well choreographed, but also, more important, necessary [writes Meg Wolitzer in The New York Times]. Kingsolver’s dual narrative works beautifully here. By giving us a family and a world teetering on the brink in 2016, and conveying a different but connected type of 19th-century teetering, Kingsolver eventually creates a sense not so much that history repeats itself, but that as humans we’re inevitably connected through the possibility of collapse, whether it’s the collapse of our houses, our bodies, logic, the social order or earth itself." To Wolitzer, the stories "stand beside each other in this engaged and absorbing novel, [and] the two narratives reflect each other, reminding us of the dependability and adaptiveness of our drive toward survival." Here is a link to the full review:

And here is a link to Merve Emre's very different review in The Atlantic:

RSVP and Host: Requested by April 15 to Peter Greenfield ’67.

Reading-group meetings start at 7:30 pm, and generally end around 9:30. Anyone who has read the month’s selection is invited to take part; new participants are welcome, and no long-term commitment is required. If you plan to attend, please e-mail or call the hosts at least two days before the meeting, so they will know how many people to expect, and so you may be notified in the event that the location should change, as sometimes happens. Please direct questions or suggestions to petergreenfield@msn.com.

A list of books discussed by the group from 1991 through the beginning of this year may be found at the following URL: