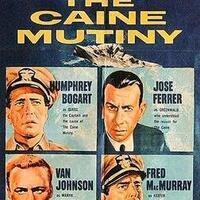 The Caine Mutiny by Edward Dmytryk

Please note: the film will be discussed, not viewed, at the meeting.

Released in 1954, The Caine Mutiny is based on Herman Wouk's novel about a mutiny on a U.S. Navy vessel in the Pacific during the Second World War and a subsequent court-martial. The book won a Pulitzer Prize in 1951. The film was directed by Edward Dmytryk, with a cast that includes Humphrey Bogart, José Ferrer, Van Johnson and Fred MacMurray. It was nominated for seven Oscars, including Best Picture, Best Actor (Bogart), and Best Screenplay.

RSVP to bcradin@comcast.net by December 16.

Reading-group meetings start at 7:30 p.m., and generally end around 9:30. Anyone who has read or viewed the month’s selection is invited to take part; new participants are welcome, and no long-term commitment is required. If you plan to attend, please e-mail or call the hosts at least two days before the meeting, so they will know how many people to expect, and so you may be notified in the event that the location should change, as sometimes happens.

The books discussed by the group from 1991 through October 2019 may be found in this list.

The home of Barbara Carter Radin ’75 RSVP for address