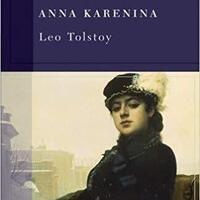 Location: The home of Peter Greenfield '67 (RSVP for address)

Most reading group selections in 2019 were from the current century. The exceptions were from 1922 and 1965. The selections for January and February of the new year are from the 1870s, an especially good decade for Western literature.

After opining that "literary lists are basically an obscenity," in a 2007 Time Magazine article about a list "of the greatest books of all time" compiled from a survey of 125 "big name" authors, Lev Grossman made a small concession: "it would be a pretty interesting obscenity." In that list, Anna Karenina was number one and Middlemarch was number ten.

Reading-group meetings start at 7:30 p.m., and generally end around 9:30. Anyone who has read or viewed the month’s selection is invited to take part; new participants are welcome, and no long-term commitment is required. If you plan to attend, please e-mail or call the hosts at least two days before the meeting, so they will know how many people to expect, and so you may be notified in the event that the location should change, as sometimes happens.

The books discussed by the group from 1991 through October 2019 may be found in this list.

The home of Peter Greenfield '67 RSVP for address