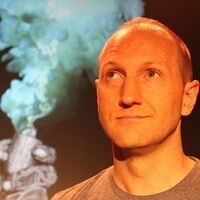 Baba Brinkman is a Canadian rap artist and award-winning playwright. His play Rap Guide to Consciousness explores the material basis of human experience in hip hop form. His clever and distinctive style has earned him the attention of the New York Times, Time Out New York, The Village Voice, NPR, Macleans, CBC, and the BBC. Brinkman has written seven hip hop plays and released more than a dozen rap albums, toured the world, and enjoyed successful runs at the Edinburgh Fringe Festival and off-Broadway in New York. He is a pioneer in both science-based rap and also "lit-hop" (literary hip hop), with rap adaptations of The Canterbury Tales, Beowulf, and Gilgamesh. ​Brinkman has won numerous awards for his "Rap Guide" science series, and he is a recipient of the National Center for Science Education's "Friend of Darwin Award" for his efforts to improve public understanding of evolutionary biology.

Free and open to the public. Sponsored by the psychology and biology departments and the Dean of Faculty office.