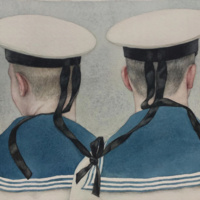 Queer Exile: The Case of the Nabokov Brothers

What is it like to be an exile within exile? To find one’s queer self doubly alienated among fellow refugees? This talk explores configurations of queer subjectivity in interwar Europe’s Russian diaspora. The story of the sizeable community of Russians who found themselves in exile after the Bolshevik Revolution is richly documented in art and scholarship. Yet queer lives and experiences are largely absent from this story, save for the homophobic currents in the oeuvre of Vladimir Nabokov. However, his unapologetically gay and virtually unknown brother Sergei helps us discover how queer artists and intellectuals contended with the heteronormative world. The case of the Nabokov brothers reorients assumptions about kinship and shows how gender, sexuality, and ethnicity are interconnected in diasporic belonging.

Roman Utkin is Assistant Professor of Russian, East European, and Eurasian Studies and Assistant Professor, Feminist, Gender, and Sexuality Studies at Wesleyan University. He specializes in twentieth-century Russian and Soviet poetry, prose, and visual culture. His current book project, Russian Berlin,examines the patterns of migration and cultural flows between Eastern and Central Europe and shows how refugees from Soviet Russia formed a unique diasporic community in Weimar Berlin. A native speaker of both Tatar and Russian, Utkin serves on the board of the Committee on Advocacy for Diversity and Inclusion within the Association for Slavic, East European, and Eurasian Studies. He is also a founding member of Q*ASEEES, the Society for the Promotion of LGBTQ Studies in Eastern Europe and Central Asia.

Sponsored by the Russian department. Free and open to the public.