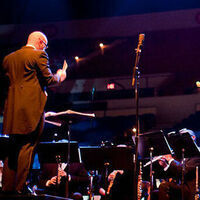 The Portland Gay Symphonic Band is pleased to present “Juxtapose,” where contrasting musical styles, effects, and eras, will be performed in this fabulous evening of rich melodies, harmonies, and rhythmic emotion. The listener will have the opportunity to experience a vast expanse of musical-art pieces, where similarities and differences will be highlighted by the ensemble.

Written by Hector Berlioz in 1840, The “Grand Symphonie Funebre et Triomphale,” the first symphony ever written for winds, will be contrasted not only by Berlioz’s “Marche Hongroise,” but also a modern interpretation of a symphony for winds, Philip Sparke’s (2001) “Sinfonietta No. 3.” The ensemble will juxtapose romantic era marches, performing Wagner’s “Grand March” from the opera “Tannhauser” as well as Dvorak’s “Finale from The New World Symphony.”

Please join the Portland Gay Symphonic Band for an evening of some of music’s most luscious melodies, and hear a juxtaposition of music, only a wind band could perform.