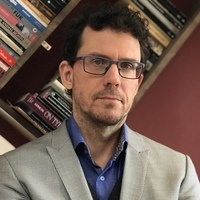 "Ichneumenoid Athena: The Posthuman Origins of 'The West' and the Xenopolis to Come"

Most 20th century political theorists presumed that the ancient Greeks were deeply anthropocentric, and that they based their politics and philosophy on claims of human exceptionalism. Using the monster from Alien (1979) and parasitic wasps as methodological inspiration, Dolgert uncovers an important nonanthropocentric alternative tradition in the ancient Greeks, and argues that the “humanism” of the Greeks is more an artefact of later authors. Re-reading Homer, Plato, and Aristotle in this manner locates new resources for crafting a more ecological-sensitive ethic for the 21st century, as well as models for nonanthropocentric political institutions.

Stefan Dolgert is Associate Professor of Political Science at Brock University, where he writes and teaches on democratic theory, critical animal studies, posthumanism, hip-hop, and ancient Greek and Chinese political thought. He is currently finishing a manuscript on the rich tradition of non-anthropocentric thought in ancient Greece.

Free and open to the public. Sponsored by the political science department.