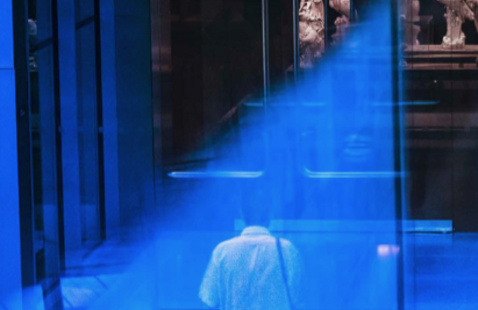 Please join Reed College, the Douglas F. Cooley Memorial Art Gallery, and the family of Reed alumna Mara Gibbs to celebrate the exhibition of Mara’s accomplished photography. The works in the exhibition consist of a newly published archival portfolio of Mara’s work, produced by the Cooley Gallery and printed at Pushdot Studios in Portland. Gibbs had a passion for both traditional darkroom processes and vibrant, digital effects. Her black-and-white photographs, many taken in public places, are rich observations of daily life, full of texture and luminously gradated light and shadow. In her color work, Gibbs experimented with transparency, collage, and constructed narratives. The narrative works are alternatingly surreal, mischievous, elegant, and somber. Together, the photographs in the exhibition reveal the range and depth of Mara’s skills and subject interests, including: portraits of family and friends; life at Reed; self-portraiture; museum architecture; public life; and experimentations in color and abstraction. The exhibition is organized by Cooley Gallery curator Stephanie Snyder ’91 and curatorial assistant Annabelle McCall ’18, along with Mara’s parents. At the close of the exhibition the portfolio of Gibbs’ photographs will be accessioned into the Reed College Art Collection—a meaningful tribute to Mara that may be accessed by the Reed community and used in the classroom.

Born to Lauren Gibbs and Steven Flax, Mara was named Margalit after Steven’s mother, Pearl. Margalit is the modern Hebrew form of Margaret, which means pearl. Mara grew up in and around Cambridge, Massachusetts, and attended high school at Cambridge Rindge and Latin School, where she won a prestigious Boston Globe Scholastic Art & Writing Award, graduating in 2015. A creative child, Mara began composing songs at age four, and by the time she was five identified as a math girl, taking every math class offered. She danced and won awards for her photographs. Her favorite courses at Reed included philosophy and computer science. She was accepted into an internship program with Reed Software Design Studio Pilot Project (2015–2017), which paired students with experienced professionals in the technology industry.

Mara’s life ended tragically during her sophomore year at Reed, in an off-campus apartment fire. At a life celebration for Mara at Reed shortly after she died, friends shared memories and anecdotes of the whip-smart sophomore, relating her propensity for dispensing hugs and humor. Her father related that while she had friends in high school, it was at Reed that Mara found friends who appreciated her essence.