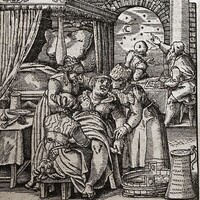 Aggressive criminal prosecution of unwed mothers who killed their newborns in early modern Europe (1550–1750) has led historians to assume that Europeans were extremely intolerant of infanticide. New research throws this assumption into question. Even in early modern Geneva, a city renowned for its harsh punishment of extramarital sex, authorities sometimes turned a blind eye to the untimely deaths and abandonment of unwanted bastards. These findings force us to reconsider how early modern Europeans thought about fertility and sought to manage it.

Sara Beam is an associate professor of history at the University of Victoria and the author of Laughing Matters: Farce and the Making of Absolutism in France (2007), which won the Bainton Prize from the Sixteenth Century Studies Conference. Her critical edition and translation of a 1686 infanticide trial is forthcoming from University of Toronto Press, and she is currently working on a book about the decline of judicial torture in early modern Europe.

Sponsored by Humanities 211-212 and the history department. Free and open to the public.