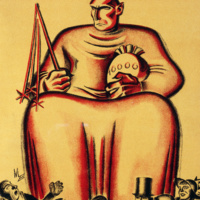 Marx famously characterized social bonds in capitalism as “commodity fetishism". Why “fetishism,” a word first used to characterize a form of religious worship? What insight about collective belief systems and social bonds in capitalist societies may have lain behind Marx’s decision to use a 19th-century anthropological term for the "Other" (i.e., fetish worshippers) in order to describe the dominant socio-economic form of the "enlightened West"? This lecture begins from Marx’s insight that capitalism is a modern religion in order to explore the forms and fates of the religious energies (mana) that it sets loose.

Eric L. Santner is the Philip and Ida Romberg Distinguished Service Professor in Modern Germanic Studies at the University of Chicago. He has published a number of books on the intersections of psychoanalysis, German-Jewish studies, and political theory, including his most recent work, Sovereignty Inc.: Three Inquiries in Politics and Enjoyment (2019).

Sponsored by the division of literature and languages. Free and open to the public.