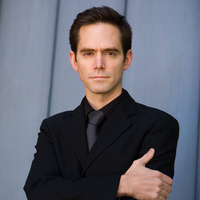 Tonight's program will include "Peace" (1984) and "All About Love"  (2004) and will feature mezzo-soprano Hai-Ting Chinn and tenor Thomas Glenn as well as the Reed College Collegium Musicum and String Quartet. Co-presented with Fear No Music.

Mezzo-soprano Hai-Ting Chinn performs in a wide range of styles and venues, from Purcell to Pierrot Lunaire, Cherubino to The King & I, J.S. Bach to P.D.Q. Bach. She has performed with New York City Opera, The Wooster Group, OperaOmnia, Orpheus Chamber Orchestra, Israel Philharmonic, Orchestra of St. Luke’s, the New York Collegium, the Waverly Consort; and on the stages of Carnegie Hall, the Mann Center in Philadelphia, the Edinburgh Festival, the Verbier Festival, London’s West End and Grimeborn Festival, and the Resonant Bodies Festival. She is also the creator and performer of Science Fair: An Opera With Experiments, a staged show of science in song. Of mixed Chinese and Jewish ancestry, Hai-Ting is a native of Northern California and currently resides in New York City.

Grammy Award winning tenor Thomas Glenn enjoys a favorable reputation as a creative interpreter of bel canto and Classical period literature as well as modern works. His most frequent operatic roles include Count Almaviva in Rossini’s Il barbiere die Siviglia, Lindoro in L’italiana in Algerì, Ferrando in Mozart’s Così fan tutte, and The Evangelist in J.S. Bach’s St. Matthew Passion. In contemporary works, he created the role of Robert Wilson in John Adams’ Doctor Atomicand enjoys collaborating on new works by composers like Jack Perla, Jake Heggie, David Schiff, Tarik O’Regan and Rufus Wainright. Glenn has performed at major opera companies including San Francisco Opera, The Metropolitan Opera, The Lyric Opera of Chicago, Netherlands Opera and The English National Opera among others. He has also performed with major orchestras including the Atlanta Symphony, The Cleveland Orchestra, the National Arts Centre Orchestra of Canada, China National Symphony, San Francisco Symphony, Seattle Symphony, Colorado Symphony, Berkeley Symphony and Oakland Symphony. Glenn holds three degrees in music performance: a bachelor’s from Brigham Young University, a master’s from The University of Michigan and a doctorate (abd) from Florida State University. He is a former Adler Fellow at the San Francisco Opera, a past winner of the Concours International de Chant de Canari, France, and a semi-finalist in the Monserrat Caballé Competition in Zaragoza, Spain.

Fear No Music promotes music education through the high quality public performance of modern and contemporary classical music and by offering groundbreaking youth mentorship in composition. They promote living composers and expose audiences to contemporary classical music being made both locally and globally through a uniquely relevant annual concert series. They educate and train the next generation of young composers in the community by way of the Young Composers Project.