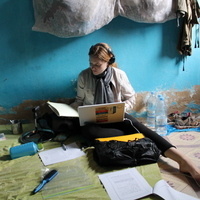 Ideophones are words that vividly evoke sensory experiences through sound symbolism, often playing a central role in performance and social identity. They are especially prominent among the languages of Africa and constitute up to 25% of the lexicon of some African languages. Despite this, ideophones are rarely integrated into linguistic descriptions. Rhey are also vulnerable to attrition due to language change, urbanization, and the move towards written language, making their documentation a matter of some urgency. Baglini's fieldwork in Senegal presents a case study of ideophones in Wolof, and highlights their grammatical properties and their use in different social and linguistic contexts. She suggests that ideophones reflect a general property of human languages to conventionalize sensory demonstrations in the lexicon.

Rebekah Baglini is an Andrew W. Mellon Postdoctoral Fellow in the Humanities at Stanford. Baglini's primary research focus is cross-linguistic semantics: investigating variation and universality in the building blocks of meaning.

Faculty, Students, Open to the Public