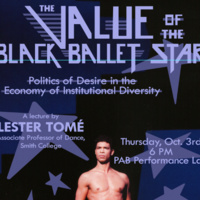 Lester Tomé Lecture: The Value of the Black Ballet Star

Lester Tomé is an associate professor in the dance department and an affiliate of the Latin American and Latino/a Studies Program at Smith College. He is also a faculty member in the Five College Dance Department. He teaches dance history and anthropology, as well as cultural studies, social theory and research methods in dance.

He is the author of articles in Cuban Studies, Dance Research Journal and Dance Chronicle, and chapters in The Routledge Companion to Dance Studies, The Cambridge Companion to Ballet and The Oxford Handbook of Contemporary Ballet, among other publications.

In 2013–14, he was the Peggy Rockefeller Visiting Scholar at Harvard University’s David Rockefeller Center for Latin American Studies. During 2014–15 he was a National Endowment for the Humanities Fellow and an affiliate researcher at the Afro-Latin American Research Institute at Harvard’s Hutchins Center.

These awards supported his research for The Body Politic: Ballet and Revolution in Cuba (Oxford University Press, forthcoming). The book illuminates transformations of the Cuban ballet as a function of the Cuban Revolution’s ideology and cultural policy, pertaining to questions of political agency, class, economy, nationalism, race, gender and sexuality. It also examines the links between ballet performance and other performances of the Revolution’s ideology—for example, the performance of militarism in parades, of labor in sugarcane fields, of machismo in everyday life and of interracial romance in the public sphere.

He is a member of the editorial boards of Cuban Studies and Dance Research Journal. Since 2012, he has chaired the Dance Studies Association’s Working Group for Latin American, Latino and Caribbean Dance Studies.

Tomé has been interviewed for NPR’s Weekend Edition and Smith’s Insight, and consulted for stories in Pointe Magazine, CNN, and Yahoo News. He has been invited to lecture at Columbia, Harvard, Tufts, Marquette, Temple, Haverford, Washington University in St. Louis, the Korean Dance Society (South Korea), the National Center for the Humanities and Social Science (Spain), the Gabriela Mistral Cultural Center (Chile) and other institutions.

As a dance critic, he worked for CMBF-Radio Musical Nacional (Cuba) and El Mercurio (Chile), and was a contributor for Dance Magazine and other publications. In 2004, he participated in the American Dance Festival’s Institute for Dance Criticism as a fellow of the National Endowment for the Arts and the New York Times Foundation.

Sponsored by the Mellon Foundation for the Arts