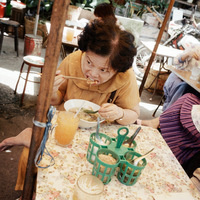 Eyehold to Eyehold is an immersive one-person exhibition by renowned American photographer and Reed alumnus Leo Rubinfien. The exhibition is curated by Cooley Gallery director Stephanie Snyder from the artist's extensive archive of pictures made across Asia between 1979 and the present. Some of the images were featured in Rubinfien's 1992 book, A Map of the East, while others were never presented publicly until 2014, in his book, New Turns in Old Roads. Several of the photographs in Eyehold to Eyehold have, until now, never been published or exhibited.

Leo Rubinfien grew up in Japan, and came to Reed College from Tokyo in 1970, traveling back and forth on school holidays. As a young Westerner immersed in Asian life, he developed a strong awareness of the cultural hybridity of post-war Japan, the connections between Japan and America seeming as vivid to him as their differences. What their two cultures merged to produce was new and indescribable, yet graspable through sight and sensation.

At Reed Rubinfien looked back continually to Asia, longing for the universe of tangible objects, scenes, and faces he’d known there. He recalls feeling the influence of Gary Snyder and Lloyd Reynolds, the eminent Reed poet and calligrapher, who valued the physical above the theoretical, and sought to discover meaning through a loving engagement with the surfaces of things. Rubinfien felt an enormous appreciation for Reed, but left the college in 1972 to work intensively with photography, at California Institute of the Arts, and then at Yale.

It was while living in New York in the early 1980s that Rubinfien began to want to return to Asia and explore the complex, intertwined beauty and un-beauty that he remembered from childhood; ultimately, he spent eight years photographing his way through Japan and other cities and countries that were undergoing profound economic and cultural change at that time, including Thailand, Vietnam, Hong Kong, Jakarta, Surabaya and the Java hinterlands, Manila, Shanghai, and Peking. In 1992, he published A Map of the East in conjunction with his first museum exhibition, at the Metropolitan Museum of Art.

Rubinfien’s journey through Asia continues today and has resulted in an unprecedented body of images that ask, as he reflects: “The question of how much is corrupt and how much not yet corrupted . . .  . [The photographs] cannot answer the question of course, and when I look at them now I am struck by their ambivalence, by the mixture of tenderness and irony in their voice . . . Losing continually, we are also continually enriched by naming that which we have lost, and recognizing that which remains.”

The title of this exhibition—Eyehold to Eyehold (an expression Rubinfien coined in his essay “Wanderyears”) points to those moments of recognition when sight arrests and expands experience into something that is physical and transcendent at the same time. As Rubinfien recounts, he was lovingly trained by his father to engage the world peripatetically, through regular, lengthy, undirected walks and eccentric investigations. Eyehold to Eyeholdreturns Rubinfien and his work to Reed—a place of intellectual and emotional awakening for the artist.

Over the past three decades Rubinfien has also gone far beyond Asia to explore the landscape of globalization on five continents. In 2008, he published Wounded Cities, an artistic and literary exploration of his life in New York and the global city after the traumatic events of September 11, 2001. The book is a tour-de-force of personal and historical reflection, in which each photograph literally unfolds as Rubinfien works, in his text, to unfold the meanings of the events through which he is living. “The world city,” he writes, “is the place where you are when you cannot tell exactly where you are . . . the place where Asia, Europe, Africa and America continually re-shape each other, each in its own image, and where people often tell me that they feel a freedom and exhilaration they don’t feel in the parochial, backwater towns of their native countries. And because it is full of their aspirations and longings, it is also a place where beauty and anxiety and sometimes even fear are all mixed up together.” The world became a darker place after 2001, Rubinfien says, but the making of photographs—of searching for an eyehold—still seems to produce a redemptive effect.

Free to the public.