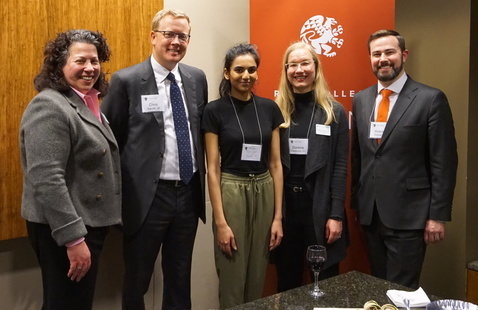 The Reed Legal Network cordially invites you to hear Reed alumni share about their careers in law and beyond on Tuesday, February 22, 2022 at 5:30 p.m. PST/8:30 p.m. EST.

Whether working as attorneys or applying expertise in other fields, Reedies with law degrees have fascinating careers in a wide variety of professions. Panelists Hilari Allred ’85 (French), Derek Bradley ’06 (Political Science) and Andy McLain ’92 (English) will talk about what led them to their career paths after Reed. Legal Network Chair Andrew Schpak ’01 will moderate this lively conversation that will be of interest to pre-law students, alumni considering or attending law school, and alumni with JDs curious about professional pathways.

Hilari Allred ’85 - Hilari received her J.D. from Boalt Hall at the University of California, Berkeley, in May of 2000. While in law school, she represented asylum clients through the International Human Rights Law Clinic under the guidance of Laurel E. Fletcher and Caroline Patty Blum. After graduating from law school, she worked as an associate attorney at the law firm of Wilson Sonsini Goodrich & Rosati, in Palo Alto.

She began her career in immigration law at the Law Offices of Robert B. Jobe in August of 2001, and started her own solo practice in Oakland, California in July of 2006, which focuses on removal defense, asylum, family-based immigration, and appeals.

Before becoming an attorney, Hilari taught French language and literature as Visiting Assistant Professor at Williams College and Miami University of Ohio. She holds a Ph.D. in French from Yale University and a masters degree in French from Cornell University. Hilari lived for two years in Paris, including a year as a visiting fellow at the École Normale Supérieure on a Chauteaubriand Fellowship from the French government. She has also spent a summer in Regensburg, Germany, studying German language and culture with the support of a DAAD German government fellowship.

She graduated Phi Beta Kappa from Reed College in 1981 with a major in French. Hilari is a member of the State Bar of California and the American Immigration Lawyers’ Association (AILA). She is admitted to the Ninth Circuit Court of Appeals, and to the United States District Court for the Northern District of California. In November of 2004, she successfully argued Lolong v. Ashcroft, 400 F.3d 1215, 1219 (9th Cir. 2005) before the Ninth Circuit Court of Appeals.

Hilari has also served on the Executive Board for the American Immigration Lawyers’ Association, Northern California, as AILA’s 2005-2007 liaison to the Office of the Chief Counsel in San Francisco, and liaison for Immigration and Customs Enforcement from 2007 to 2011. She has given presentations on immigration law topics for AILA of Northern California, the Immigrant Legal Resource Center, and at Hastings School of Law. Hilari speaks French, Spanish, and some Portuguese, Russian and Persian. In her spare time, she enjoys reading, running in Oakland’s regional parks, and music, and she is a member of the San Francisco Bay Area Chamber Choir.

Derek Bradley ’06 - Derek was born and raised in Bloomington, IN. He moved to Portland to attend Reed and graduated in 2006 with a degree in Political Science. He pursued his interest in politics and in the field for several years, most notably for then State Representative Greg Matthews. Eventually he decided to attend law school. He went to Lewis and Clark and graduated in 2016 with a certificate in Environmental Law. After clerking for a year for a Multnomah County judge he decided to return to politics. He has been Portland City Commissioner Jo Ann Hardesty’s Policy Director since she took office in January 2019.

Andy McLain ’92 - Andy grew up in Portland and attended Reed from 1988 to 1992. He majored in English, minored in pool, and spent more time in the SU than the library. After graduation he took the path of least resistance which, in the early 90s, led him into technology. From help desk to network tech and eventually to software developer, he moved from job to job without a larger career arc. After the dot-com bubble burst, he gave in and started law school at Lewis & Clark. When he graduated in 2006 with a certificate in Criminal Procedure, he started his career at an indigent criminal defense firm in Hillsboro, Oregon. The “small town lawyer” feature of that firm provided a doorway into family law—divorce and custody cases. In 2012 Andy opened his own firm, McLain Legal Services, relocating to downtown Portland. The firm is known for skill with high-conflict family law cases. The firm’s lawyers have appeared in 18 of Oregon’s 27 judicial districts to date. This spring, the firm is relocating to South Portland, just in time to celebrate its 10-year anniversary.