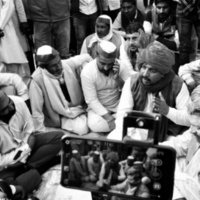 Over the last four months, India has witnessed one of the largest social movements in recent history with over 250 million people joining a nationwide movement demanding the repeal of three new agriculture laws. Hundreds of thousands of farmers who organized a march on the national capital, Delhi, are now gathered on the outskirts of the city continuing the protest while facing crackdowns from the government.

Learn more about the events that started these protests, the geopolitics that catalysed them and the stakes and repercussions for the future of India and the world.

This event is organized by the Desi Club.