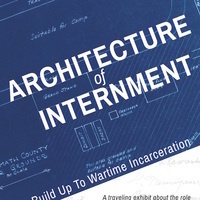 Architecture of Internment: The Build Up to Wartime Incarceration

This traveling art exhibit explores how Oregonians participated in the decision to incarcerate Japanese Americans and Japanese immigrants during World War II. It is the story of how individuals, organizations, businesses, and elected officials advocated for the incarceration of Oregonians of Japanese ancestry or stood by while it happened. The forced removal and imprisonment of 120,000 people of Japanese ancestry from the West Coast was built, among other things, on widespread racism and a commonly held belief in the supremacy of white people, the pursuit of profit and the exploitation of labor, resentment of Japanese American success, and a desire for political gain. For many Oregonians, the onset of war with Japan and the myth of sabotage at Pearl Harbor was used to justify this mass incarceration.

In this exhibit you will see:
• Personal letters and proclamations from Oregonians to Governor Sprague in 1941 and 1942, advocating for the exclusion and incarceration of Japanese American Oregonians.
• The Oregon Governor’s response to these letters and proclamations revealing his changing position under political and social pressure.
• Blueprints of potential civilian prison locations such as race tracks and fairgrounds.
• Letters from Japanese Americans responding to this injustice.

Part of the Inclusive Reed project.

We can easily understand to play euchre card game, because here https://myeuchre.com did not use account sign and no need charges.