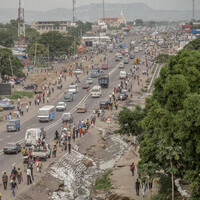 The Belgian anthropologist Filip De Boeck will speak about some of the ideas underlying Suturing the City: Living Together in Congo’s Urban Worlds (London: Autograph ABP, 2016), a book (and exhibition project) he made in collaboration with Congolese photographer Sammy Baloji. In this joint collaborative project between an anthropologist and an artist, De Boeck and Baloji bring up ways to rethink the urban archive and constitute it in alternative ways. If the (Central African) urban landscape seems to refuse inhabitation and appears as a black hole that makes any clear assessment of it simply disappear in the force of its corrosive gravity, the authors explore various textual and visual, or horizontal and vertical, ways to investigate the hole and illuminate its blackness.

Filip De Boeck is professor of anthropology and research coordinator of the Institute for Anthropological Research in Africa (IARA) of the University of Leuven. Since 1987 he has conducted extensive field research in both rural and urban communities in the Democratic Republic of Congo. His books include the acclaimed Kinshasa: Tales of the Invisible City, a joint book project with photographer Marie-Françoise Plissart (Ghent/Tervuren: Ludion/Royal Museum of Central Africa, 2004); the edited volume, Children and Youth in Postcolonial Africa (Oxford: James Currey, 2005); and most recently Suturing the City. De Boeck and photographer Baloji also collaborated on Urban Now: City Life in Congo, a major exhibition of photography and video that was shown in Brussels and New York in 2016. In 2010, De Boeck released Cemetery State, a 70 minute documentary film which examines urban youth's politics of death in a Kinshasa graveyard; it won the Mirror Award and was screened in several national and international film festivals.

Sponsored by the division of history and social sciences and the department of anthropology. Free and open to the public.

Faculty, Students, Open to the Public