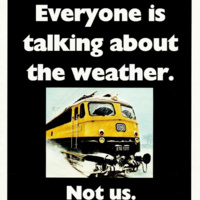 How The Modern World Lost Interest in Weather: A Media History

On its face, weather sounds like the most banal and mundane thing possible. When people talk about the weather, we usually take that as a sign of nothing to talk about. This talk aims to show that the accusation that talking about the weather is intellectually empty is hardly the case in the age of climate change, and even dangerous. Reading the skies is one paradigm case of human-nature interaction, and studying weather can stand in as part for whole as an inquiry into the environments humans have made or unmade. The history of modern weather forecasting is also a history of the militarization of the sky and oceans and is co-extensive with the history of modern telecommunications and computation.

John Durham Peters is the María Rosa Menocal Professor of English and of Film & Media Studies at Yale and the author of The Marvelous Clouds: Toward a Philosophy of Elemental Media (2015) and Speaking into the Air: A History of the Idea of Communication (1999).

Co-sponsored by the German, Comparative Literature, and Environmental Studies departments. Free and open to the public.