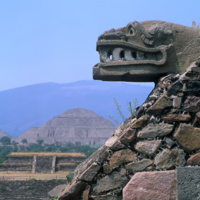 From Teotihuacan to Tenochtitlan: The Biggest Cities in the Ancient New World

Teotihuacan and Tenochtitlan were the largest and best-documented cities in the New World, giving them an important role in the task of understanding ancient urbanism in Mesoamerica. However, they were also the most distinctive and divergent cities of ancient Mesoamerica. Teotihuacan (100-600 CE) began as a radical experiment to create a city unlike any other in Mesoamerica. It stood out for its extensive orthogonal planning, the great prosperity of its commoner population, and the rich offerings buried deep inside and under its pyramids. When the city fell, later urban builders rejected most of the distinctive features of Teotihuacan in favor of more ancient Mesoamerican patterns. Tenochtitlan (1325-1521 CE), on the other hand, started out as a typical Aztec city-state capital. Two factors allowed it to grow into a huge metropolis of 200,000 people: its location on an island that was easily enlarged to accommodate a rising population, and its status as the capital of a powerful and wealthy empire. When its rulers wanted to distinguish Tenochtitlan from other Aztec cities, they drew on principles from the ruins of Teotihuacan. Smith will tell the stories of these two ancient mega-cities and introduce some of the current debates about them (e.g. autocratic or collective government? Dominated by human sacrifice or not?).

Michael E. Smith is Professor of Archaeology at Arizona State University and director of the ASU Teotihuacan Research Laboratory in Mexico. His research follows two themes: The Aztecs, Teotihuacan, and other Prehispanic societies in central Mexico; and comparative urbanism. He has directed fieldwork projects at several Aztec provincial sites, excavating houses to study daily life. He has published ten books and numerous scholarly articles on the Aztecs. Dr. Smith’s second major theme is comparative and transdisciplinary research on urbanism, exploring the similarities and differences among cities throughout history and around the world, including comparisons between ancient and modern cities. He also publishes on comparative empires, economies, and systems of social inequality. His 2016 book, At Home with the Aztecs: An Archaeologist Uncovers their Daily Life won the Best Popular Book award (2017) from the Society for American Archaeology.

Co-sponsored by the Reed College classics department and Humanities 110 program and the Archaeological Institute of America. Free and open to the public.