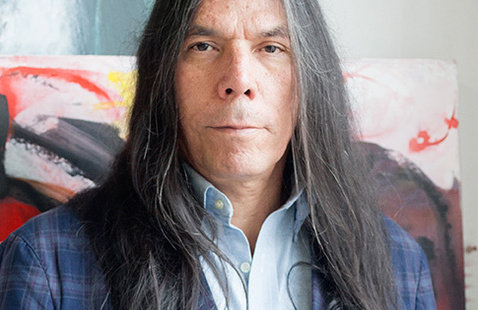 Kahlhamer refers to the sketchbook as a “nomadic studio,” a site of immersive notational creation and reflection—a “book of moments” in the artist’s words—that imaginatively witnesses and captures the fluid overlay of diverse geographies, myths, and cultures. Throughout his sketchbooks Kahlhamer observes and reimagines the landscapes and peoples he encounters. Paris, New York, the American Southwest, London, and the friendly confines of home and studio, flow together with graphic abandon.

At times the books’ images are interlaced with text—as in a sequence of pages commemorating Prince—at other times they swell into abstract moods and environments, nonsequential, layered, and lucidly oneiric. The books possess an intoxicating energy: a combination of Kahlhamer’s masterful drawing skill combined with his deep connection to punk, comics, and graphic novels, and his life-long practice as a musician, and now actor.

During a decade at the Topps Chewing Gum company Kahlhamer worked as an artist and art director alongside the great Art Spiegelman, author of Maus. Kahlhamer’s work draws connections between American graphic arts and comic book traditions, back to the Ledger Drawings created by Native American artists in the nineteenth century. Kahlhamer considers Plains’ Ledger Drawings “the first American graphic novels.”

In addition to Kahlhamer’s sketchbooks, the exhibition includes over forty works of sculpture, painting, and drawing. This multiplicity of mediums and material methodologies allows Kahlhamer’s work to be experienced with a heightened awareness of the visual and conceptual “chords” that resonate throughout all of his artistic interests, in particular, the seminal relationship between music, text, and image that has inspired his work since his first solo exhibition in 1994.

Brad Kahlhamer was born in Tucson, Arizona and resides in New York City. His work has been exhibited extensively in the United States as well as internationally. His large-scale installation Bowery Nation was exhibited at the Nelson Atkins Museum of Art, Missouri (2013), and the Aldrich Contemporary Art Museum, Connecticut (2012). Recent group exhibitions include: One Must Know The Animals, Madison Museum of Contemporary Art, Wisconsin, (2012); and The Old, Weird America: Folk Themes in Contemporary Art, Contemporary Arts Museum, Houston, Texas, (2008). Kahlhamer was included in Musée du Quai Branly’s exhibition The Art and Life of the Plains Indians, which opened in 2014 and traveled to the Nelson Atkins Museum of Art, Missouri, and the Metropolitan Museum of Art, New York.

A life-long musician, Kahlhamer was commissioned by the Smithsonian to write a score for the silent film Red Skins (2002). Most recently, Kahlhamer acted in and composed music for an ecological Spaghetti Western filmed on location in abandoned ranches north of Reykjavik, Iceland.