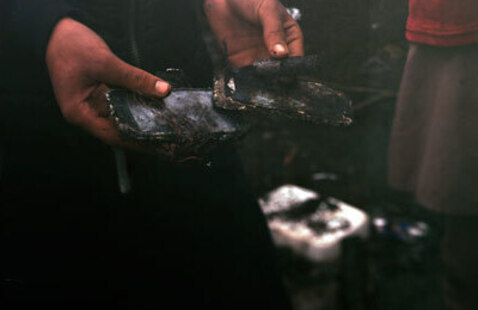 The Cooley Gallery is proud to present Gulalhi—the first one-person U.S. exhibition of UK-based artist and Reed alumna Stephanie Gervais '09. The title of the exhibition is a Pashto name—meaning flowers—that appears as a tattoo in the artist’s photograph AZIZ, 2018. Gervais created the works in Gulalhi while living outside of the Unites States from 2010–2018.

Residing and making art in the hillside favelas above Rio de Janeiro for four years, Gervais then moved to England to earn her MFA at Goldsmiths University. It was there that she discovered a network of people supporting the rapidly expanding camp of Sudanese, Afghan, and Syrian refugees in Calais, France. Aided by her knowledge of French, Gervais began spending long stretches of time in Calais, living in the camp and getting to know the residents. Struck by their self-organization, endurance, and translation of social customs—and invited to share in this aesthetic of hospitality and conviviality—Gervais slowly began recording residents' stories over tea and meals.

The works in Gulalhi were created during and after this time as Gervais’ relationships deepened. Some of the works in the exhibition have continued to evolve in response to Gervais’ lasting friendships with people who left the camp—smuggled into England in trucks, or onto trains departing from Calais.

“Aesthetics is a way of communicating—without words—aspects of one’s sublime unconscious with that of others. It is sensing the way others identify and relate to one’s own experience.” *

Over the last decade, Gervais has developed an aesthetic that privileges presence, openness, and transference, whether through the sound and touch of the body, or the translation of words and gestures through different materials and contexts.

While the works in Gulalhi seek to embody and relate to the experiences of others, Gervais' position is neither documentary nor objective as she creates within and alongside her surroundings. Gervais believes in the realness of artistic acts to engender communication, understanding, and emotional release. Over time, these encounters are recounted and symbolized through material events—patterns, clothing, and non-sequential photographs that belong together but do not ask to be understood as the material evidence of anything other than the needs and aspirations of people.

While the Cooley is something of an artificial hothouse for these peripatetic, sensory objects, Gervais is using the opportunity to continue her outreach from the United States. During the exhibition, Gervais will introduce different forms of communication into the space, including: web-based conversations with refugees living in the UK; group making sessions with students and the public; and the first regional screening of the films of Afghan performance artist Lida Abdul.

Free and open to the public. After December 16, the exhibition is open by appointment only through January 3, 2019.

Photo credit: Stephanie Gervais, Phone and phonebank burnt by the police, 2018. Archival inkjet print on Dibond, 22.5 x 28 in., Courtesy of the artist.