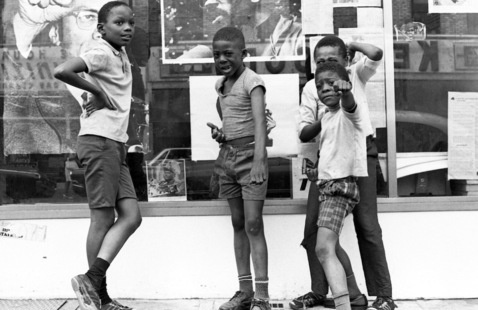 https://www.reed.edu/gallery/
View map
Add to calendar
Save to Google Calendar Save to iCal Save to Outlook

Reservations required for exhibition viewing.
Proof of vaccination and booster required on campus.
Free and open to the public.

The Douglas F. Cooley Memorial Art Gallery, Reed College, presents the first West Coast exhibition of photographs by Bev Grant—Portland-raised activist, musician, artist, and educator. The exhibition is co-organized by OSMOS founder and director Cay Sophie Rabinowitz ’89 and Cooley Gallery director and curator Stephanie Snyder ’91. Grant’s exhibition celebrates the publication of the artist’s first monograph, Bev Grant Photography 1968-1972, edited by Rabinowitz, and published by OSMOS. The Cooley is honored to welcome Rabinowitz home to Reed. As one of the college’s most accomplished alumni working in the arts today, her independent vision, and dedication to underrepresented artists, are inspiring manifestations of a Reed liberal arts education.

American photographer Bev Grant created these riveting and tender black and white images from 1968 to 1971, while working for a variety of media outlets such as New York Newsreel, a radical filmmaking collective established in 1967 (it exists today as Third World Newsreel). During this time, Grant participated in, and photographed, left wing and radical protests in and around New York City and along the East Coast. In 2017, Grant began organizing and preserving her negatives, which had been sitting in a box on her closet shelf for fifty years, many unprinted. During this time Grant devoted herself to raising her two children as a single parent, working fulltime, and leading her socially-conscious folk/rock band The Human Condition. It was around this time that Bev Grant met Rabinowitz who brought her professional expertise to conserving and sharing Grant’s remarkable photographs.

Using a Pentax 35mm camera, Grant chronicled demonstrations and community outreach programs, providing direct access to the passion and purpose of this incendiary yet constructive time. Grants photographs contain storied first-person portraits, and both serious and celebratory visions of resistance, survival, and direct action by activist groups whose names are less common today: the Poor People’s Campaign; New York Radical Women; The Young Lords: and Vets Against the Vietnam War. Many of the images contain unforgettable glimpses into the lives of the movement’s children, families, neighborhood elders, and shop owners.

Grant’s photographs draw visual connections between the radicalized movements of the late 1960s, and those of today, including Black Lives Matter, and, locally, Don’t Shoot Portland: however; striking differences exist in the presence of the police. The 1960’s uniforms look like leisure wear compared to the post-9/11 high-tech paramilitary gear the police wear today. These comparisons are critical reminders of the systemic racism, police violence, and mass incarceration in the United States today. Grant’s work reanimates the rich contrasts and textures of black-and-white photography from the era, highlighting the physical power of the medium. The exhibition images are as troubling, urgent, and joyful today as they were fifty years ago.

About OSMOS and Cay Sophie Rabinowitz

Bev Grant’s first monograph is published by New York-based OSMOS, founded by exhibition co-curator and Reed alumna Cay Sophie Rabinowitz ’89. The book features texts by William Cordova and Johanna Fernández, and serves as the exhibition catalog. The book may be purchased at the Cooley Gallery or via www.osmos.online while supplies last. OSMOS was founded in Berlin in 1997, and expanded to New York in 2012 by Cay Sophie Rabinowitz. OSMOS has since developed into a fully integrated concept for curatorial and editorial activities. OSMOS is composed of multiple operational components, including: OSMOS Address (Project space and operational headquarters); OSMOS Station (Artist Residency); OSMOS Publishing (Quarterly Print Magazine and Artists Monographs); and managing artist’s estates.

Cay Sophie Rabinowitz is an internationally celebrated publisher, editor, curator, and arts organizer, known for her deeply personal professionalism. She received her undergraduate degree in 1989 at Reed College, completing her thesis with Natalia King, Professor of English and Humanities, on the subject of Michele de Montaigne's Les Essais. Rabinowitz maintains that her reading of the sixteenth-century philosopher's composition continues to shape how she engages with the world. Rabinowitz entered the PhD program at Emory University, where her scholarship on art and propaganda took her to Berlin for research. Once back in New York, Rabinowitz held a variety of positions including: Senior Editor of Parkett (1999-2008); faculty at Parsons School of Design (2000–2009) and Columbia University (2011–2013); and Artistic Director of Art Basel. She emerged from this period as a fiercely independent art world innovator. In 2012 Rabinowitz moved OSMOS into an East Village storefront that was once a tavern frequented by Emma Goldman. The front became a project space for gatherings and exhibitions with the editorial office in back.

Tuesdays, Thursdays, Fridays, and Saturdays from Noon-4pm gallery hours are for Reed students, faculty, and staff only.