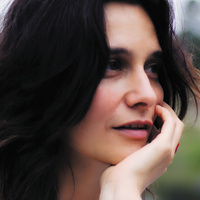 European Landscapes of Memory: How to Tell the Unpredictable Past?

Katja Petrowskaja grew up in Kiev, Ukraine and studied in Tartu, Estonia, and Moscow, Russia. She lives in Berlin and is a columnist for the influential German daily Frankfurter Allgemeine. Maybe Esther, her German-language history-memoir of her Jewish family, has been  called “a mesmerizing work of reconstruction and reflection” (New Statesman).

"I want to stop and quote from every other paragraph, and I want to give copies to people I love—I want, in other words, to stem the dissolution of storytelling that is the very point of this book. I want it to last forever, or at least all summer, “ writes Masha Gessen in The New Yorker.

Maybe Esther is an international bestseller which has been translated into twenty languages. “Rarely is research into family history this exciting, this moving. If this were a novel, it would seem exaggerated and unbelievable. This is great literature” (Der Spigel).

In her appearance at Reed, Petrowskaja  will read from Maybe Esther and discuss it in an interview with Reed professors Katja Garloff (German) and Evgenii Bershtein (Russian).

Co-sponsored by the Russian and German departments. Free and open to the public.