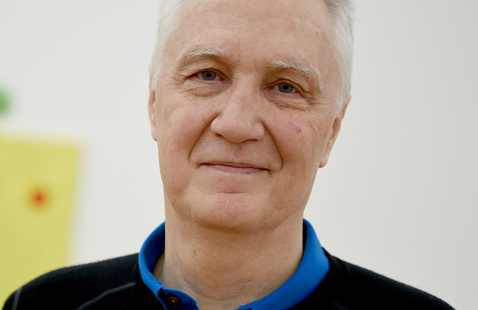 THIS EVENT HAS BEEN CANCELED. It will be rescheduled at a later date. Check back on this site for updates.

Since graduating from Reed College in 1968, David Reed has created paintings that explore the materiality and illusionism of gestural expression, influenced by art historical and contemporary forms of color, light, and movement. In this intimate talk, he reflects on his liberal arts education at Reed College, how it has shaped his work over the last forty years and confirmed his belief in painting as an intellectual practice.

While Reed’s works are deeply influenced by painters such as Piero della Francesca and Phillip Guston, they are equally influenced by the high-definition technologies reshaping contemporary vision: computer screens, television monitors, smart phones, etc. In fact, it is by means of Reed’s meticulous craft knowledge that the surfaces of his paintings hyper-accelerate vision within fields of dazzling gestural “ribbons” that appear to emit light in perpetual motion. Glazing, overlapping, and carving his luminous color palette has allowed Reed to create previously unimaginable forms of dynamic abstraction.

David Reed is a Californian who lives and works in New York. He graduated from Reed College in 1968 after attending the Skowhegan School of Painting and Sculpture in Maine and the New York Studio School where he studied with Milton Resnick and Philip Guston among others. He has taught at Skowhegan, The New York Studio School, The School of Visual Arts in New York, The California Institute of the Arts, Valencia, and the University of California Los Angeles as well as being a visiting artist in various art schools. Recent one-person shows include Vice and Reflection#2 at the Neues Museum, State Museum for Art and Design Nuremberg, Germany and David Reed, New Paintings at Gagosian New York.

Reed's Thomas Lamb Eliot Award recognizes a Reed alumnus or alumna who has demonstrated long and important service in their field of endeavor. Further, the award seeks to recognize graduates who exemplify qualities that Reed values, including intellectual rigor, independence, and integrity.