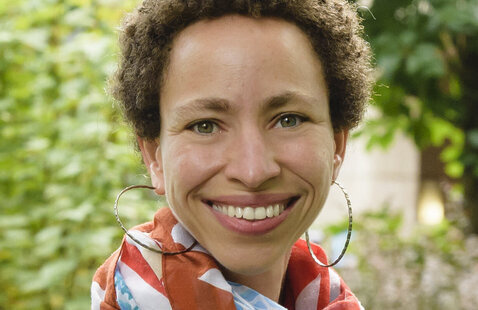 Discovering the root-cause of laughter has been an ongoing concern (one can even say an obsession) for French philosophers. Montesquieu, Charles Baudelaire, and Henri Bergson, to name just a few, all tried their hand at solving the mystery. In this talk, Dr. Corine Stofle will discuss the ways in which René Ménil, a Martinican intellectual, sought to intervene in a field that had been up until then largely dominated by a Euro-centric bourgeois perspective.

On the eve of 1945, Ménil wrote an essay extolling humor as a quintessential literary mode of resistance and predicting that colonial authors would contribute significantly to a literature of humor. This article seeks to clarify what humor means to Ménil and what laughter and irony have to do with it. In contemplating both the essay’s poetics and politics, Dr. Stofle also suggests that Ménil’s vision not only anticipated the Caribbean literature to come, but also offered a precocious illustration of it.

This research is part of a broader conversation that seeks to re-inscribe Ménil within the pantheon of French-Caribbean thinkers, alongside Frantz Fanon and Édouard Glissant.