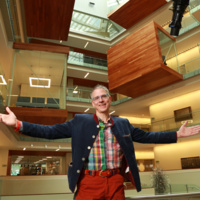 Consciousness and Its Place in Nature

Christof Koch, Chief Scientist and President at the Allen Institute for Brain Science in Seattle, will speak about how human and non-human animals not only act in the world but are capable of conscious experience. He will discuss the empirical progress that has been achieved over the past several decades in locating the footprints of consciousness to the posterior part of cortex, in the back of the brain. Koch will introduce Integrated Information Theory, which explains in a principled manner which physical systems are capable of conscious, subjective experience. The theory explains many biological and medical facts about consciousness and has been used to build a consciousness-meter to assess the presence of consciousness in neurological patients. IIT also predicts that consciousness is much more widespread in biology than assumed in the Western canon, and that conventional digital computers cannot be conscious, even if they were to perfectly simulate a human brain. Consciousness does not arise as a form of computation but as a causal power.

Sponsored by division of philosophy, religion, psychology, and linguistics and the Rhodes Fund. Free and open to the public.

The Psychology Building is located on the east side of campus and corresponds with the West Parking lot, on the campus side.