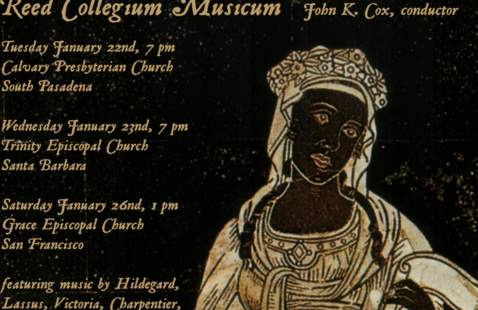 We are pleased to announce that Reed's Collegium Musicum choral group will perform Vox Sybila - Voice of the Prophetess this January as part of its California tour, which includes concerts in Los Angeles (January 22) and Santa Barbara (January 23), and a reception in Los Angeles (January 21). The program will include music by Hildegard, Lassus, Victoria, Charpentier, Rameau, and Whitacre.

The Collegium is a select vocal ensemble that specializes in the performance of pre- and post-modern music. Founded in the late 1950s by a group of student and faculty enthusiasts, the Collegium has been a center of musical activity on the Reed campus for nearly 60 years. In 2017, the ensemble received the Early Music America College Development Grant for their concert at the Boston Early Music Festival.