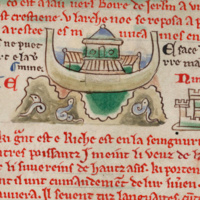 Geography was of great significance to medieval Jewish-Christian relations, from the battles over Jerusalem and the emergence of the notion of “the Holy Land” to the restriction of Jews to legally mandated ghettos. The ultimate manifestation of the inscription of geography upon Jewish-Christian relations was the expulsion of Jews from most of Western Europe from the thirteenth through the sixteenth century. In this talk, Mittman argues that cartography played a central role in reflecting and reinforcing medieval Christian perceptions of Jews and Judaism. Cartographic imagery was intended by royal and ecclesiastical patrons to define, constrain, and dehumanize Jews, and the medium transformed the message. Mittman willexplore the role these maps played in the fraught interactions between Jews and Christians, primarily in England, where the majority of maps from the Middle Ages, and also many prevailing anti-Jewish beliefs and practices, were generated.

Asa Simon Mittman is professor and chair of art and art history at California State University, Chico, where he teaches ancient and medieval art as well as thematic courses on monsters and film.

Sponsored by the art department's Cooley Gray Fund. Free and open to the public.