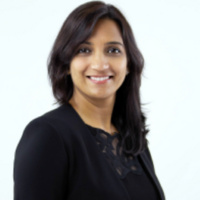 Smita Shankar is VP of Research and Development at Impossible Foods. In this role, she oversees the various R&D and engineering teams. Prior to this role at Impossible, Smita led Microbial Strain and Fermentation Development. As an early hire at Impossible Foods, Smita established the yeast strain development program in early 2014, after Impossible Foods identified Soy Leghemoglobin as its key ingredient. This involved bringing on new technology, setting up a laboratory from scratch, developing new workflows and most importantly, identifying exceptional scientists and engineers to work on the problem. This work resulted in a patent covering the methods Impossible Foods uses to produce its heme.

Smita played a key role during the company’s scale-up process, which drove her personal growth into leadership. Successful scale up to the manufacturing phase for Impossible Foods required extremely close collaboration between the scientists and engineers, and a clear understanding of the company’s business needs. These successes enabled the rapid commercialization of the Impossible Burger, and supported the company’s expansion to where it is today.

Using animals as a cheap way to make meat has brought us to the brink of environmental collapse. At Impossible foods, we’re trying to reduce the impact of animal farming on the planet by creating a delicious burger made entirely out of plant materials. A key driver of flavor in beef is heme, a molecule found in animal muscle. We use yeast fermentation to make soybean Leghemoglobin, the heme protein that is the key ingredient of the Impossible burger.

My educational background is in biochemistry, molecular biology and yeast genetics. I joined IF as a scientist almost 7 years ago. In my talk, I will share a little bit about my educational background and the scientific work that led me to Impossible Foods. I will describe my journey within IF, focusing on how we made the early discoveries on how to make heme. Specifically, I will describe novel genetic engineering approaches that led to improved production of Leghemoglobin. These include manipulation of the endogenous heme biosynthetic pathway and overexpression of a specific gene expression activator, Mxr1. I will end with what it took to build a team of scientists and engineers that continuously work on this problem and make the Impossible burger possible!

This seminar is supported by the Thomas Dunne Lecture Fund.