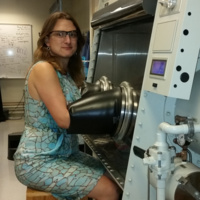 Nancy Williams is a native of the Pacific Northwest, raised in Puyallup, Washington, just east of Tacoma. She attended Harvey Mudd College in Claremont, California as an undergraduate, where she did mechanistic organometallic chemistry research with Mitsuru Kubota. Nancy was the first graduate student to receive a PhD from Karen Goldberg at the University of Washington (now U Penn), and was the last NATO-NSF postdoc in chemistry, studying with prof. dr. Gerard ridder van Koten, and then did a postdoc with Maurice ‘Brook’ Brookhart at UNC, Chapel Hill. While her graduate work involved platinum chemistry, her postdoc research was again centered on palla. Upon appointment to the then Joint Science Department (now Keck Science Department) of Claremont McKenna, Pitzer, and Scripps Colleges in Claremont, California, she returned to her forever love, the metal platinum, and embarked on a project studying C-C reductive elimination from platinum(IV) complexes. After tenure in 2009, she began a new project which she will tell you about in her seminar, while continuing to work on C-C reductive elimination. Nancy came out as trans over the period 2012-2014, and has been involved in trans advocacy and activism ever since. Nancy has been a member of the Trans Chorus of Los Angeles since 2015, and lives in Claremont with her spouse Aithan (they/them) and their two cats, Atalanta and Galen (both they/them, ‘Atty’ and ‘Gale’ or ‘the squirrel and dragon’ in nickname form).

Call Me Nancy: The Hunt for the Whale
One Chemist’s 10-Year Reckless Pursuit of a Novel P-Rich Platinum Pincer Complex

Nancy Williams received tenure at the Keck Science Department of Claremont McKenna, Pitzer and Scripps Colleges (all Primarily Undergraduate Institutions, or PUIs) in 2009, and has been making the most of it. She had put off a challenging research project until after tenure that she feared might take years before the first publication— a lead time she couldn’t afford prior to tenure. She did not, however, realize how many years it would take. The project has been the synthesis of a molecule that would use the orbital properties of a ligand on platinum to promote the cleavage of an alkane C-H bond. Williams will tell the story of the synthesis of a compound she nicknamed, “the white whale”, a platinum complex that was ten years in the synthesizing, and the interesting preliminary chemistry it is displays.

This event is open to the public. Please email johnstonk@reed.edu for the Zoom password.