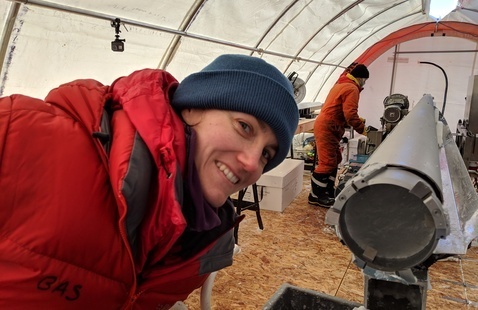 Mackenzie Grieman is a paleoclimatologist who uses ice cores to study past climate and environmental change. She received her BA in Public Policy Analysis with a concentration in Chemistry from Pomona College in 2009 and her PhD in Earth System Science from UC Irvine in 2016. Her doctoral research involved using chemicals in Arctic ice cores to examine forest fires over the past few thousand years.  She then became a Postdoc in the Earth Sciences Department at Cambridge, where she measured chemicals in an Antarctic ice core to investigate the possible contribution of the ice sheet to sea level rise during the Earth’s last warm period.  She is currently a Visiting Assistant Professor in Chemistry and Environmental Studies at Reed.

Part of the West Antarctic Ice Sheet (WAIS) and its surrounding ice shelves may have collapsed during the Last Interglacial (~120,000 years ago), resulting in global sea level rise. The aim of the WArm Climate Stability of the West Antarctic ice sheet in the last INterglacial (WACSWAIN) project is to investigate the likelihood of this collapse. As part of this project, a 651-meter ice core was drilled to bedrock at Skytrain Ice Rise in Antarctica during the 2018/2019 field season.  Records of chemical impurities in ice cores are used to reconstruct past climate.  Sea salt trapped in this ice core has the potential to be used to infer changes in the proximity of Skytrain Ice Rise to a marine environment, which could indicate ice sheet or ice shelf retreat.  The isotopic content of the ice core melt water is a proxy for changes in temperature and regional climate patterns.  In this seminar, we will discuss ice core sampling and measurement techniques, age scale development, and preliminary results from the Skytrain ice core continuous flow analysis campaign.

This event is open to members of the Reed Community and their invited guests.  Chemistry Students can access the Zoom link via the Chemistry Majors Moodle. If you are unable to access the Moodle please email johnstonk@reed.edu for the Zoom link.