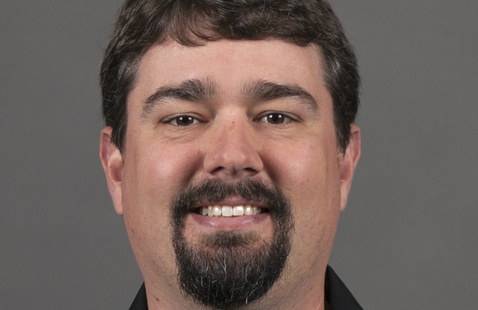 Darren Johnson is a Professor of Chemistry, Director of the Materials Science Institute, and the Bradshaw and Holzapfel Research Professor in Transformational Science and Mathematics at the University of Oregon. He was an inaugural Faculty Fellow in UO’s new Knight Campus for Accelerating Scientific Impact and co-founded a new Molecular Probes and Sensors Masters Track in the Knight Campus Graduate Internship Program, where he currently administers the Industrial Partners Immersion Lab and Lens of the Market professional development programming. Darren’s research draws inspiration from challenges in environmental, biomedical, and sustainable chemistry, and research in the group uses supramolecular chemistry as a tool to explore a variety of problems in self-assembly, molecule/ion recognition, and inorganic cluster synthesis.  Darren was co-founder of SupraSensor Technologies, a UO spinout that sought to commercialize remote sensors for nutrient management in precision agriculture and was acquired by The Climate Corporation in 2016.  He is co-editor in chief of the Journal of Inclusion Phenomena, serves on the editorial board for Supramolecular Chemistry, has co-authored >150 peer-reviewed publications, is co-inventor on over 15 pending and issued patents, and is an inaugural Senior Member of the National Academy of Inventors. He obtained his BS in Chemistry from the University of Texas at Austin in 1996, his Ph.D. from UC-Berkeley in 2000 working with Ken Raymond, and he was an NIH post-doctoral researcher in Julius Rebek’s lab at the Scripps Research Institute from 2001-2003.

This talk will provide a brief overview of supramolecular chemistry pursuits in my research group.  I will then specifically describe the development of modular, inherently fluorescent receptors as "supramolecular" hosts for small molecules and ions.  Throughout the talk, structural studies will highlight the group’s design strategies in "anion coordination chemistry". The talk will provide a brief historical overview of a class of urea receptors that form 1:1 complexes with halides and other anions in solution and the crystalline state.  This receptor class exhibits tunable “off-on” or “on-off” fluorescence in the presence of anions, depending on the placement of electron-donating and -withdrawing groups on the host.

Fundamental studies on the nature of interactions between anions and their hosts will be discussed. As one key example, CH•••X– hydrogen bonds have emerged as important components of anion receptor design. This field is now beyond asking "Do CH hydrogen bonds exist?" with numerous examples of strong CH hydrogen bonds well-characterized in synthetic and biological systems; however, our understanding of the fundamental factors controlling their strength and selectivity remains limited.  Investigations into the nature of the C-H•••anion hydrogen bond and efforts to target “non-traditional” anions will also be described. The receptor class features a key aryl CH hydrogen bond donor at its core.  Substituent effects on CH hydrogen bonds reveal an influence on anion binding strengths and selectivities, suggesting the possibility may exist to use these "non-traditional hydrogen bonds" to bias anion recognition.  The electron withdrawing groups used to polarize aryl CH hydrogen bonds can also result in aromatic rings that feature “halogen bonding” and/or “anion-π” type interactions to bind anions; these interactions and associated solvent effects play a key role in this story at times as well. Finally, approaches in environmental anion sensing will be described that showcase how fundamental supramolecular chemistry can perhaps be translated into commercial applications