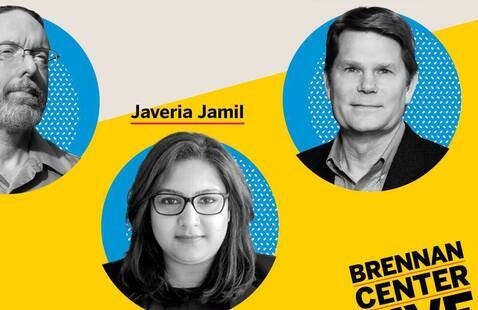 Join Reedies all over the country for a virtual gathering after the Brennan Center for Justice talk, “Bad Partners: Why Local Law Enforcement Should Leave FBI Joint Terrorism Task Forces.” The Brennan Center talk starts at 2 p.m. PST/5 p.m. EST, and after it wraps up we’ll jump over to our own discussion on Zoom. We look forward to a lively conversation with you all on this timely topic. Brennan Center researcher Peter Miller ’06 and New York Chapter Chair Andrei Stephens ’08 will co-host the alumni discussion.

Register for the virtual Brennan Center talk
Register for the post-talk discussion with Reedies
After registering, you will receive a confirmation email containing information about joining the event.

More about the NYU’s Brennan Center talk:
FBI Joint Terrorism Task Forces (JTTFs) inflict harm on local communities through racial profiling, harassment, suspicionless surveillance and investigations, and exploitation of immigration enforcement, all of which are authorized under federal guidelines loosened after 9/11. The FBI relies on the labor of state and local law enforcement officers assigned to the JTTFs, who agree to follow federal guidelines even if they conflict with state and local law, policies, and regulations. Civil rights advocates and community groups in Portland, San Francisco, and Oakland organized successful campaigns and lobbying operations to demand that their city legislatures hold local police accountable to local laws and ultimately withdraw from the JTTFs when the FBI refused to allow such public accountability. Advocates from each of these cities will discuss their efforts to organize public resistance to JTTF activities, enlist their elected representatives, craft legislation, and ultimately end local police participation in JTTFs, providing a model for other localities.

This event is produced in partnership with New York University’s John Brademas Center.