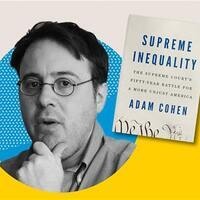 In recent years, the Supreme Court has empowered moneyed interests to wield disproportionate influence in elections, gutted the Voting Rights Act, and upheld President Trump’s Muslim ban. These decisions fit a troubling, decades-long pattern, argues journalist Adam Cohen. His new survey of high court rulings, Supreme Inequality: The Supreme Court’s Fifty-Year Battle for a More Unjust America, finds that since the Nixon era, the Court has done little to protect the rights of the poor and disadvantaged.

RSVP via event website (for lecture) and email (for hosts) by Feburary 26.

Register
This event content is powered by the Localist Community Event Platform.