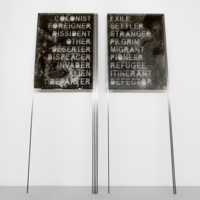 Tannaz Farsi, an important Oregon-based artist, is the winner of the 28th annual Bonnie Bronson Fellowship Award. Farsi lives in Eugene, Oregon, where she has taught at the University of Oregon since 2008 and is currently an associate professor in the School of Art and Design. Farsi was born in Tehran and relocated to the United States in 1985 during the Iran-Iraq War. Her work employs many materials and techniques, language, and technology, to create spaces that address social and political circumstances, in particular experiences of diaspora and displacement.

Tannaz Farsi’s work has been exhibited at venues throughout the United States, including SFAC, (San Francisco, CA) Portland Institute of Contemporary Art, (Portland, Oregon), Disjecta (Portland, OR), Pitzer Art Galleries (Claremont, CA), Tacoma Art Museum (Tacoma, WA), the Urban Institute of Contemporary Art (Grand Rapids, MI), Delaware Center for Contemporary Art (Wilmington, DE), and Sculpture Center (Cleveland, OH.) She has been granted residencies at Bemis Center for Contemporary Art, Ucross Foundation, the McDowell Colony, Studios at Mass MOCA, Santa Fe Art Institute and the Rauschenberg Residency. Her work has been supported through grants and awards from the Oregon Arts Commission, National Endowment for the Arts, University of Oregon and the Ford Family Foundation where she was named a Hallie Ford Fellow in 2014. Born in Iran, Tannaz Farsi lives and works in Eugene, Oregon. Farsi earned a Bachelor of Fine Arts from the West Virginia University and a Masters of Fine Arts in Ceramics from Ohio University.

Since its inception in 1992, the Bronson Fund—named after the late American painter and sculptor Bonnie Bronson—is annually awarded to an artist of outstanding merit who lives and works in the Pacific Northwest. In addition, the Bronson Fund purchases artwork by each new Fellow, adding it to the Bronson Collection. The collection is on long-term loan to Reed College, where it is exhibited throughout the campus and curated by the Director of the Douglas F. Cooley Memorial Art Gallery, Stephanie Snyder.