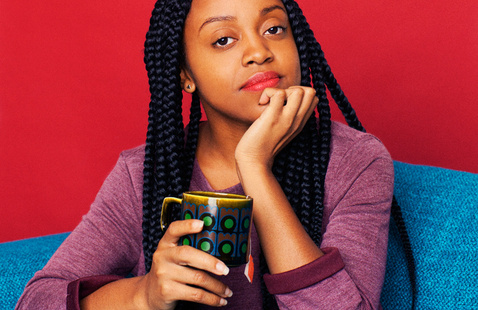 BuzzFeed star Quinta B. will discuss race, comedy, and new media through the lens of her own story to kick off Reed's 2018 Black History Month.

Quinta Brunson is a writer, actor, and stand-up comedian from Philadelphia. She was honored as a 2017 JFL New Face of Comedy and can be seen starring in her upcoming Facebook sketch series, Quinta vs. Everything. Quinta B. was hand selected by Issa Rae and Jill Soloway for the 2017 Forbes 30 under 30 list. She created, sold, executive produced, and starred in two premium streaming series in 2016: Broke for YouTube Red and Up for Adoption for Verizon Go90. Quinta B. started her journey at Second City in Chicago and has grown to amass over one million Facebook followers and hundreds of millions of video views across Facebook, YouTube, and Instagram. Prior to joining BuzzFeed Motion Pictures, Quinta B. created the series The Girl Who's Never Been on a Nice Date. The series went viral on YouTube and Instagram and was one of the first series to gain a huge fan base on both social media platforms.

Free and open to the public. Sponsored by the Multicultural Resource Center.